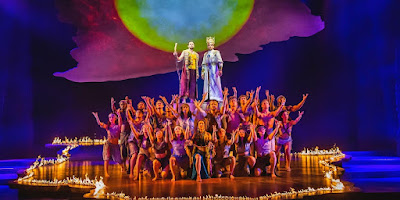 Last night Elliot, Jonathan, Darce, Steve, and I went to see The Prince of Egypt at Dominion Theatre in London's glitzy West End.

The Prince of Egypt is based upon the 1998 animated musical drama film produced by DreamWorks. The story is the biblical tale of Moses (Luke Brady) and Rameses (Liam Tamne), the Egyptian plagues, how the Jews were led out of Egypt through the Red Sea. The telling of the tale was naff though. The main leads sang well but the staging was a bit 'Eurovision Half-time Act'. The bikini-clad dancers were very 1980s, the acting a bit 'end of term school play', and the songs forgettable. Jesus Christ Superstar it ain't.

Nice to see the boys though.
Posted by overyourhead at Wednesday, September 29, 2021