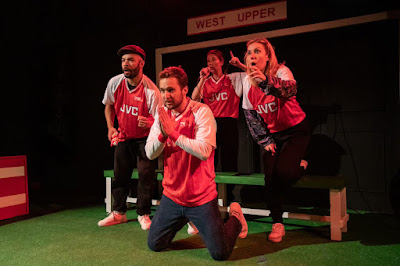 "When you’re in love nothing else matters. You become obsessed. But it can get pretty tricky if that obsessive love is directed towards eleven men wearing the same shirt and running around like idiots for ninety minutes every Saturday."

Based the Nick Hornby book of the same name the play is an exhilarating, moving and brutally funny look at that obsessive love of football that will appeal to all football fans - and all football haters - alike!

Fever Pitch charts over two decades of 'Nick' and his total and utter passion for Arsenal Football Club; what it means to be a fanatic, what that passion means for everyone in our lives who isn't, the exhilaration, the all-encompassing moments of joys, and the totally debilitating and soul-destroying lows.

Nick is played by recent graduate Jack Trueman, making his stage debut, and he exhibits moments of pure brilliance; he is funny, compelling and very, very watchable.

The rest of the cast Ashley Gerlach, Gabrielle MacPherson, and Louise Hoare are equally excellent. Transforming as they do from friend, to family member, to girlfriend, to commentator, to opposition fan, to schoolkid... the list is endless. And they do it all with such speed and utter ease. They are an ensemble that bring the show to life.

The Hope Theatre is a relatively small space and it has been transformed cleverly with fake turf on the floor, bench seating that changes from a bed to a podium with ease, and various pictures and signs from Arsenal adoring the walls. The set design by Sorcha Corcoran is fabulous. Nick Hornby writing helps the tight space too as it is intimate, funny and very strong, and adapted here by Joel Samuels, it does a great job of turning this small room into an almost immersive piece of theatre.

Standing just few feet from you, you as an audience member get lost in the passion with which these characters speak about the football club they love. It is totally infectious.

The play doesn't shy away from the problems football faces either; not least the aggression that is all too common in football fans, the sexism towards female fans, and about the racism players face that has plagued the game for decades. This adds a layer of depth to a piece that on the surface could solely be seen as a love letter to Arsenal.

The director is Kennedy Bloomer whose tenure at the Hope Theatre was interrupted by the pandemic, making this her first and last production at the venue.

But don't just take my word for it. Fever Pitch has been nominated for three OFFIEs (Off West End Awards)