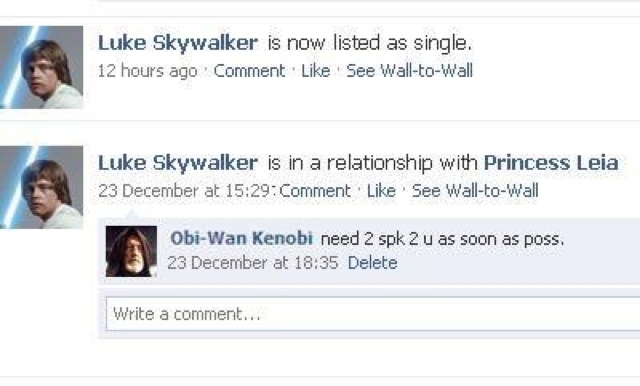 Chuck Close at The White Cube... 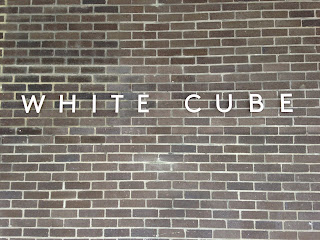 On Tuesday Stu, Andy, David and I went to the new Chuck Close exhibition at The White Cube in Bermondsey's not so glitzy LBQ (London Bridge Quarter).

Close's prints of pixelated, exploded views of the human face are quite extraordinary. He suffers from face blindness - unable to recognise facial features. He also suffered from a a severed stroke and can barely move - he holds his brush with his mouth. So this is a very personal exhibition.

The images are fantatsic. Bewitching, mesmerising and quite a technically achivement.


(Incidentally also at the White Cube is an exhibition with a naked guy on roller skates. Another reason to go!) 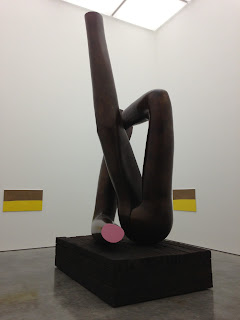 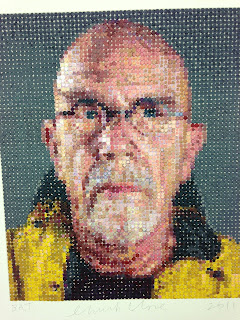 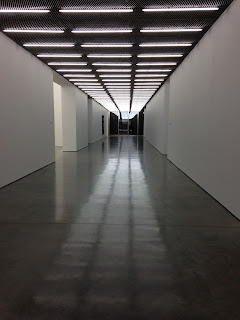 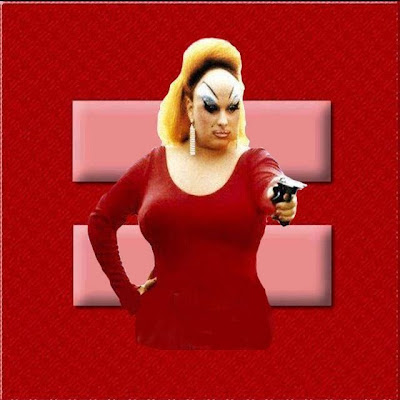 On Sunday afternoon French protesters alongside various English religious groups organised an anti-same-sex marriage rally in Trafalgar Square. Anglican Mainstream were urging Christians to turn up to protest "the sterile adult-centred nature of same sex marriage". What they didn't want to admit was their thinly veiled anti-gay agenda. This wasn't about marriage it was pure and simply anti-gay.

Naturally I (and a hundred or so other like/right-minded people) felt the need to attend and venture an alternative point of view. And shout their homophobia down. So we had our own anti-anti-same-sex marriage rally. The way you do.

So at 2:30pm I was standing in the freezing cold along with Dilwyn and Johan listening to Gallic homophobia ranting. First the speaker would rant in French and then we heard a slightly calmer English translation. Initially it was fairly good natured. They would have their say something daft and then we would chant "Shame on you!"

But when a speaker said, "I've got no problem with people BUT..." we shouted out "Everything before the 'but' is bullshit!" Not particularly catchy however I think he got our point.

It turned a bit nastier when they realised we wouldn't be silenced. I had to remind a few people shouting in my face that it was a free country. Gosh there are some awful homophobes there.

Something that amused us was that despite being a French protest they seemed oblivious that it was Gallic-crushing Nelson who was looking down on them from his atop his column - with what I like to think of as a sneer on his stony face.

If there had been a few cuter people at our counter-demo I might have suggested a kiss-in. I might be a woolly minded political activist but I'm not an complete idiot. 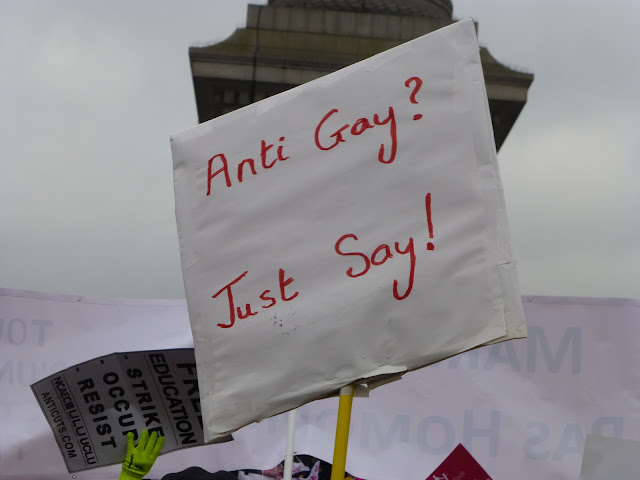 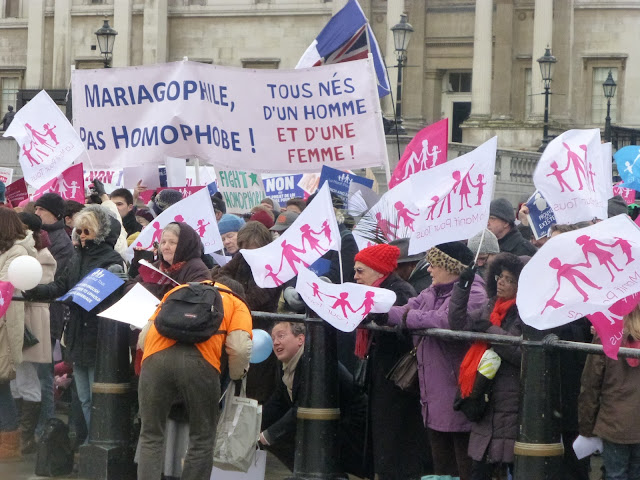 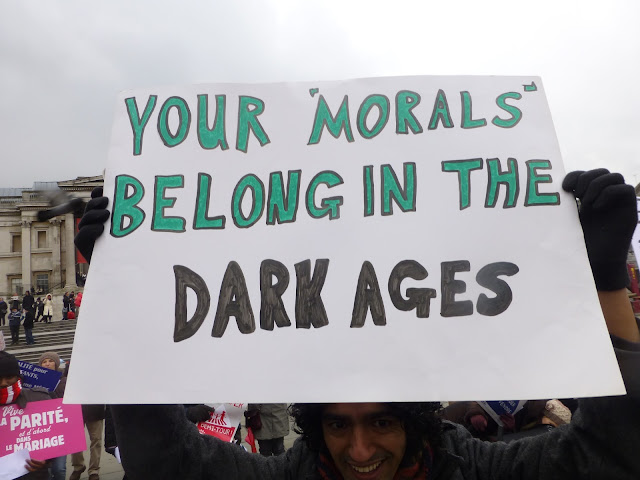 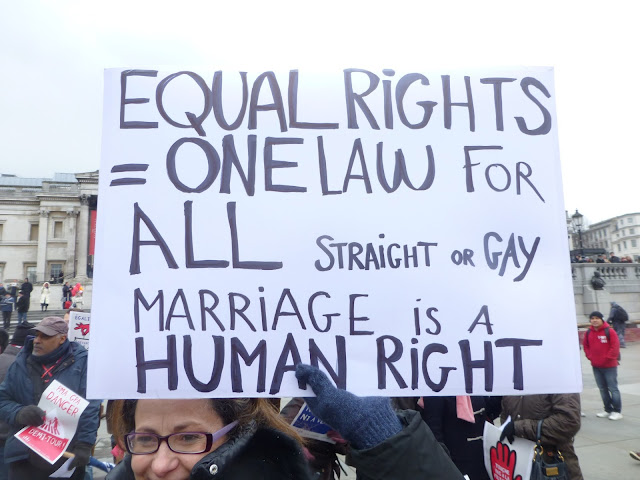 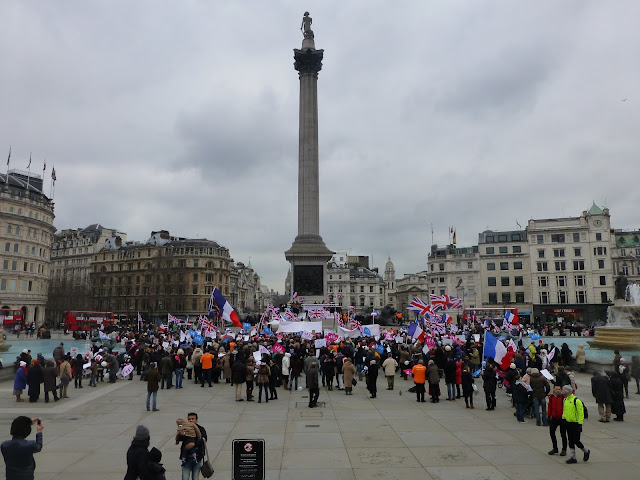 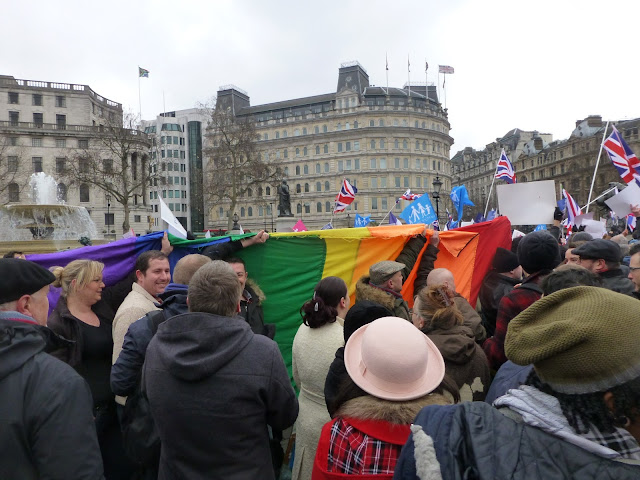 Nice to see Pope Benedict passing on the holy chalice to Pope Francis. 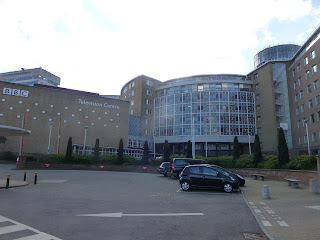 So it's farewell to BBC Television Centre. 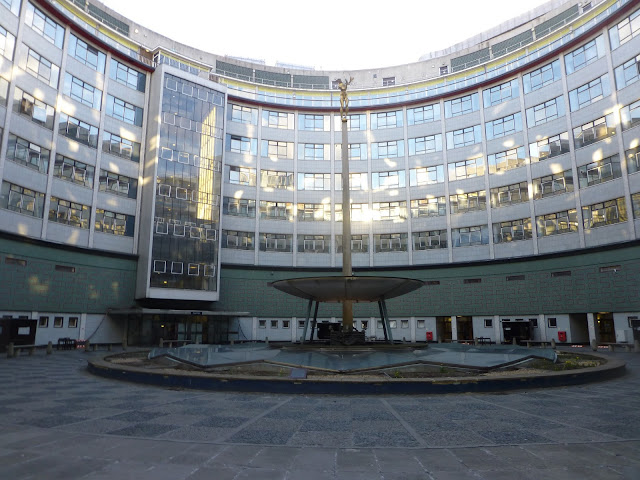 From today Stu and I have 12 days off work. We were hoping to go away. Sadly my passport is on standby to go to the Embassy for a visa for a business trip so it looks like we can't go abroad. And with the short-term weather forecast predicting wind, rain and snow across the UK - staycation it is!
Posted by overyourhead at Thursday, March 21, 2013 0 comments

Looking down from my office window at Centre Point it looks like Crossrail is coming on nicely. 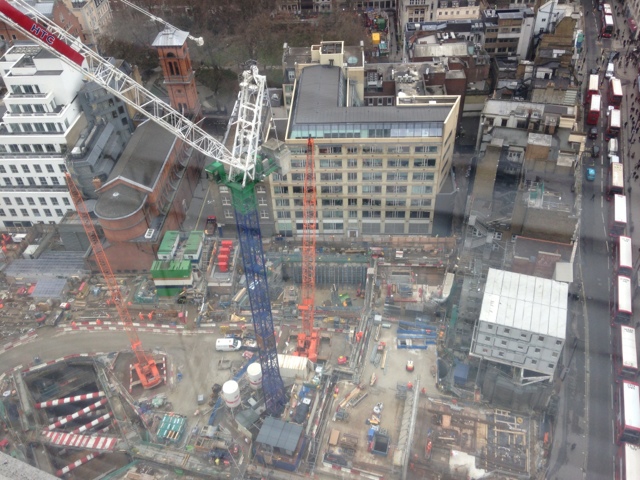 Links to this post
Email ThisBlogThis!Share to TwitterShare to FacebookShare to Pinterest
Labels: Crossrail, London, Transport for London

A Door In A Wall: A Crime Of Fashion

On Sunday Stu, Oliver, Steve and I went on the latest A Door In A Wall murder mystery – A Crime Of Fashion – which was running in Shoreditch’s Boxpark in London’s not so glitzy East End.

We followed trails, we solved puzzles, we got wet. It was great fun. We discovered who the murderer was but sadly failed to win the top prize.

Our team name was At Death's Dior (geddit??) 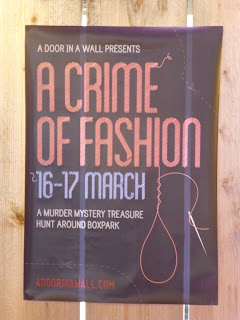 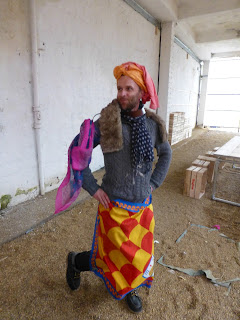 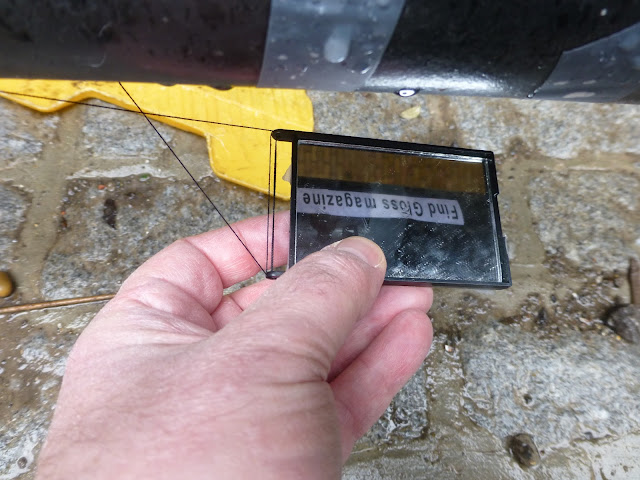 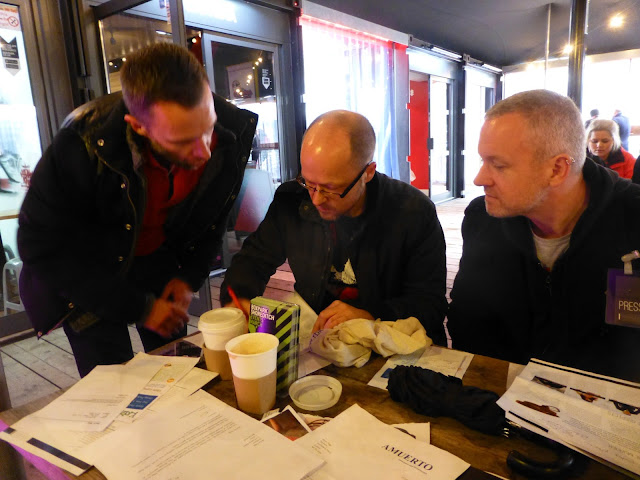 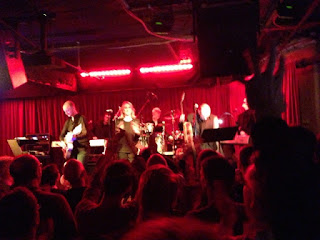 Promoting her recent covers album "The Lost are Found" the ex-Act, ex-Propaganda ice-queen vocalist gave a suitably deadpan, note-perfect performance in wonderfully stark contrast to her dreamy song choices. It was a juxtaposition that really worked.

Julee Cruise's “Mysteries of Love” from the Blue Velvet soundtrack, Stina Nordenstam's “Memories of a Color”, Bowie's 2002 single “Everyone Says Hi”, the Bee Gees' “Whispering Pines” all slipped and slid around us. We found ourselves getting drawn into every song.

There were crowd pleasers too from the luscious "Dr Mabuse" to the sing-a-long "Duel".

The band were great too. And the venue intimate. All in all a great night out. 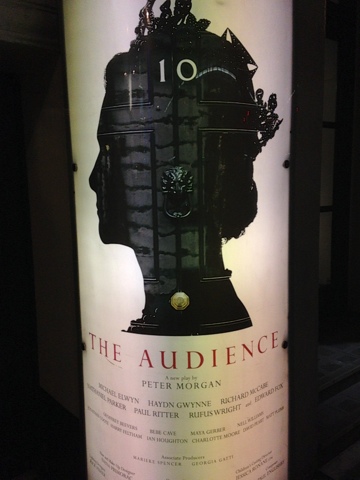 The Bride and the Bachelor...

Last night Stu, me, Oliver and Oz all went to the Barbican Art Gallery to see the new exhibition The Bride and the Bachelors: Duchamp with Cage, Cunningham, Rauschenberg and Johns.

It was fun, funny, thought-provoking, daft and occasionally dull. Everything that art with a capital A should be in my opinion.

25yrs ago I got my first mortgage. It was with the Halifax Building Society for a flat in Finsbury Park Road. I loved that place. But we move on.

Anyway, at the time Halifax made me open (and put £50 into) a new bank account. Which I'd forgotten about. Until today. It's now worth £77.86! The milky bars are on me! 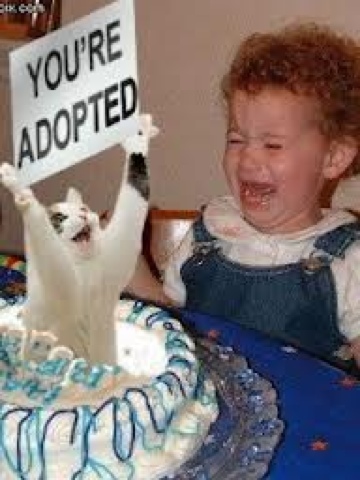 The Pope will spend the rest of his life in the Vatican avoiding the public. Sorry, did I say 'public'? I meant 'police'.

And after only one week of not having a Pope we're cured HIV - think what we can do after a month! 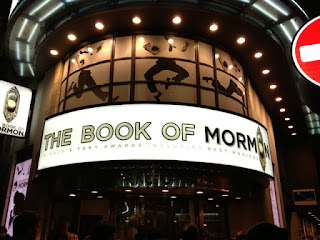 On Sunday Stu and I went to see the Roy Lichtenstein retrospective exhibition at the Tate Modern on London's glitzy South Bank. It was a Wow! It was a Pow! It was a hit! Go see! 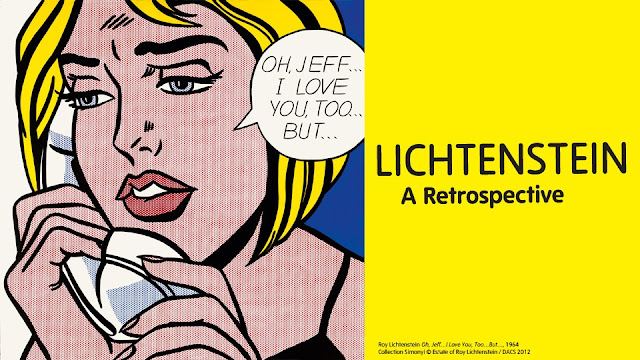 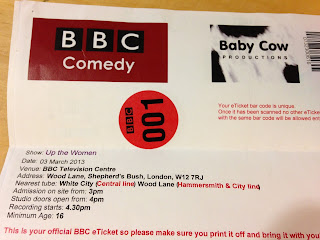 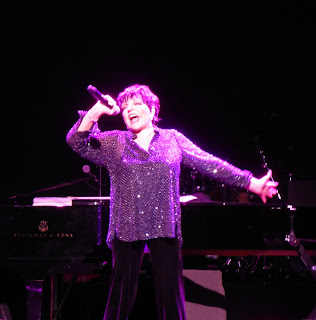