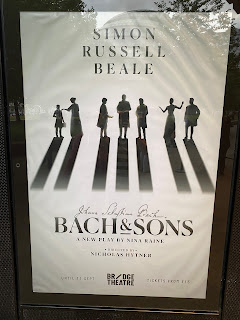 Last week Stuart and I went to see Bach and Sons at the Bridge Theatre in London's glitzy London Bridge Quarter.

Bach Snr is a perfectionist. He prefers one son to the other. And his two wives are seemingly defined by their ability to childbear; they had 20 children between them - half of whom died in infancy.

Nicholas Hytner’s production is entertaining enough. The family quarrels are perhaps all too familiar. But it's perhaps all a little too cosy. 'Amadeus' it is not.

For me the highlight was Pravessh Rana playing a really weirdly and fiercely camp Frederick the Great.
Posted by overyourhead at Tuesday, September 07, 2021