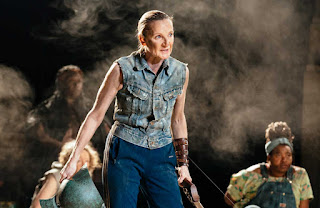 Last Friday week Stuart and I went to see an all-female production of Kae Tempest's Paradise at the Olivier Theatre on London's glitzy South Bank.

Starring Lesley Sharp the play is fairly faithful to the (rather tepid) Greek tragedy of Philoctetes.

Philoctetes (Sharp) has been abandoned by his pal Odysseus (Anastasia Hille) on a remote island. Only now wily old Odysseus wants old Philoctetes to help him fight in a war so he sends Neoptolemus (Gloria Obianyo), the son of the late Achilles, to lure him back.

Interestingly enough, these three men are the least interesting thing about the play. Rather it is the chorus - a wistful, long-suffering group of largely older women - that draw us in. We are not told whence they come - refugees? natives? from the Gods? - but unusually for a chorus they are all given names and personalities. Much of the play consists of their interactions, which essentially revolves around them looking out for each other as they grow older in this harsh land. Where the men broadly act from self-interest, the women are a community.

Sharp's performance was very broad - almost Cockney - which jarred a bit. And while Obianyo plays Neoptolemus as a calm, collected, but underneath it all scared young man, Hille’s gravelly-voiced Odysseus is pure cartoon villain.

An OK show, but not really a winner.
Posted by overyourhead at Wednesday, September 08, 2021