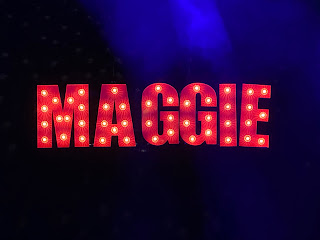 Last week Stuart and I went to see Margaret Thatcher: Queen of Soho at the Garrick Theatre in London's glitzy West End.

We had seen the show before but here it had been expanded and extended and it was a God-damned riot! We laughed our socks off from start to finish.

The fourth wall is demolished in the opening scene and remains abolished. Rather like the GLC.

Matt Tedford plays Margaret Thatcher who stumbles into Soho on the eve of the vote for Section 28 and becomes an over-night all-singing, all dancing cabaret star. There starts a big gay odyssey about gay rights, the 80’s and disco.

As the Iron Lady herself might say, "Where there are discos, may we bring harmonies."

Tedford is as caustic as Dame Edna Everage, twice as camp and packs a mighty political punch. His side-kicks Sam Donnelly and Danny Stokes get to play everyone else in the piece - from 1980s Tory cabinet members, Churchill’s portrait, arch-enemy Jill Knight, Sex-God and punk Peter Tatchell, Jenny Lives with Eric and Martin, sleazy MPs, sleazier yuppies, Grange Hill kids, the list goes on.

One thing I did notice though - Tedford's Thatcher did look uncannily like Martin Gore of Depeche Mode! 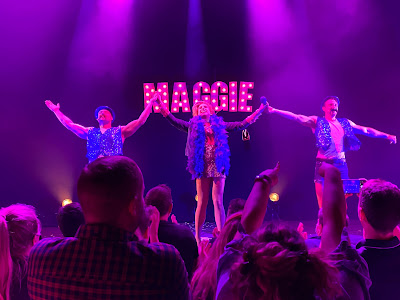 Posted by overyourhead at Thursday, September 02, 2021