Once Upon A Time In Nazi Occupied Tunisia @ Almeida Theatre... 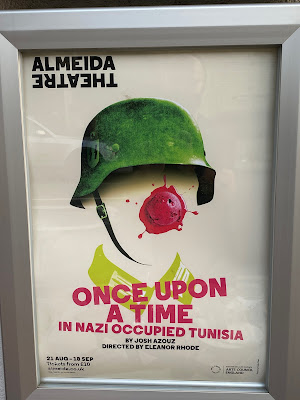 On Monday evening Stuart and I went to see Once Upon A Time In Nazi Occupied Tunisia at the Almeida Theatre in London's glitzy Islington.

The hum of the audience stops abruptly as the gigantic sun which hangs over the set glares unbearably bright. Then, we are plunged into complete darkness. Once the light returns, a man buried up to his neck in sand appears on the stage and begins to hum. The audience laughs, as do we, but we cannot help but feel uneasy – the man’s face is burnt raw. The premise of Once Upon a Time in Nazi Occupied Tunisia (directed by Eleanor Rhode) walks this fine line between comedy and gravity continuously; while the consistent humorous undercutting of horror sometimes grows tiring, it also serves to masterfully expose the vicious realities which lie beneath the play.

As we walk into the theatre, the set of Once Upon a Time in Nazi Occupied Tunisia (designed by Max Johns with light by Jess Bernberg) instantaneously hits us – collectively the elements resemble a desert, complete with topographical, rolling sand dunes, a cactus, and a glaring sun beating down. When deconstructed however, the individual elements are strange but beautiful; the sand is constructed of plywood blocks, placed at different levels, and the sun is held within a metal frame.

As we move throughout the play this set is used very cleverly – it is used to set up an elegant dining room, and in the second half resembles a bathing room in a Tunisian home with a gorgeous pool refracting light out onto its surroundings. The simplicity of the set and the way it is used is great, and the soundscapes that accompany it (created by David Gregory) are immersive and rich, drawing us wholly into the world of Nazi occupied Tunisia.

The overarching plotline of the play is of four close friends in two unhappy marriages - one Jewish and one Arab, and an affair. However, writer Josh Azouz twists this narrative into something entirely unique, a love story woven into a tale of violence, hatred, and displacement. The idea of what it means to be ‘at home’ is writ small and large, as the characters approach the question of home from a domestic point of view and a global one.

The four protagonists of Faiza (Laura Hanna), Loys (Yasmin Paige), Youssef (Ethan Kai) and Victor (Pierro Niel-Mee) are all written into a complex web of relationships which we only catch a glimpse of during the play. Azouz’ script is incredibly powerful and poignant, with every sentence holding importance – one line is enough to silence the audience, just as it is enough to cause us to burst into laughter. The dialogue between the characters is also incredibly fluid, which serves to paint the characters deeply and thoughtfully. Adrian Edmondson’s ‘Grandma’, a high-ranking Nazi, is extremely funny and has the potential to be an interesting addition to the play – however, for me, after two hours of unrelenting jokes and little change in tone, I find this character the most underdeveloped of them all.

A play from the point of view of the marginalised is one that is timely and desperately needed, as many people across the world right now face losing their homes forever.

Posted by overyourhead at Thursday, September 09, 2021