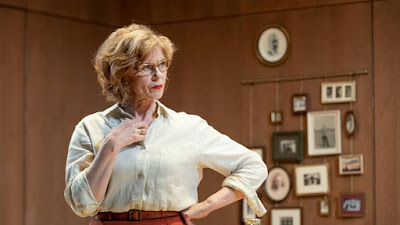 Adapted as a black comedy by Mike Bartlett and directed by Tinuke Craig the play stars Siobhan Redmond (after lead actor Samantha Bond had to withdraw due to injury) as a vicious controlling Russian matriarch whose family are fighting over the family business as their father lies dying upstairs.

The year is 1913 and while the unsympathetic in-laws, sons, daughters, and staff scheme, so bigger revolutionary changes are afoot in the country.

The play is savage, cruel and at times very funny; kicking the dying embers of capitalism’s contagious corruption.
Posted by overyourhead at Monday, October 14, 2019