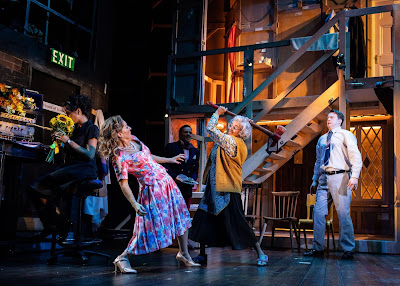 Hailed as the funniest play about putting on a play every written the piece certainly delivers on laughs.

In this 'play that goes wrong' we see a broad trousers-down farce fall apart as it tours the provinces and the cast all fall out with each other.

Hamming up their roles with particular style are Meera Syal as the housekeeper, Lloyd Owen as the handsome director, Sarah Holland as one of the house-owners, Anjli Mohindra as the prompt, and Lisa McGrillis the sexy tax inspector.

In total we see the fictional play 'Nothing On' three times - first at the ill-prepared technical rehearsal in Weston-super-Mare, then at a matinee one month later in Aston-under-Lyne from back stage as things start to go very wrong, and finally much later into the 10-week run in Stockton-on-Tees when the cast are at full-pitched war with each other.

We laughed and laughed. Great night out.
Posted by overyourhead at Monday, October 07, 2019