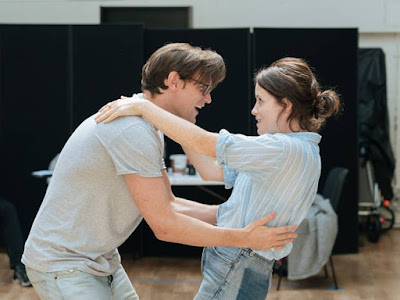 Last night Stuart and I went to the first night of Duncan Macmillan's distinctive, off-kilter love story Lungs at the Old Vic in London's glitzy Waterloo.

Directed by Matthew Warchus, Claire Foy and Matt Smith play an environmentally woke couple wrestling with one of life’s biggest dilemmas. Should they have a child? The ice caps are melting, there’s overpopulation, political unrest; everything’s going to hell in a handcart – why on earth would someone bring a baby into this world?

"I could fly to New York and back every day for seven years and still not leave a carbon footprint as big as if I have a child. Ten thousand tonnes of CO2. That’s the weight of the Eiffel Tower. I’d be giving birth to the Eiffel Tower," they wail.

Thirtysomething, educated, thoughtful and a little neurotic – the play opens with our couple are queuing at Ikea when he suggests they have a baby. She's so caught off guard – "It's like you punched me in the face then asked me a maths question" – she can't breathe. They don't come out with any of the stuff they came in for. But they do come out with a full set of self-assembly dilemmas. If you really care about the planet, if you are a "good" person, is it right to have a child?

But maybe you can think about things too much. Maybe if you can sort out the stuff between you – the sexual politics, the ability to say what you really want and give the other person what they really need – you can sort out the other stuff, too. After all, the human race has been procreating without too much thought or debate for 7,500 generations.

The play is brutally honest, funny, edgy and current. It gives voice to a generation for whom uncertainty is a way of life through two flawed, but deeply human, people who you don't always like but start to feel you might love. It's bravely written, startlingly structured, and if it loses momentum in the final 30 minutes, the sharp 'in the round' staging and two outstanding performers, keep it buzzing to the end.

Posted by overyourhead at Tuesday, October 15, 2019