Falsettos @ The Other Place... 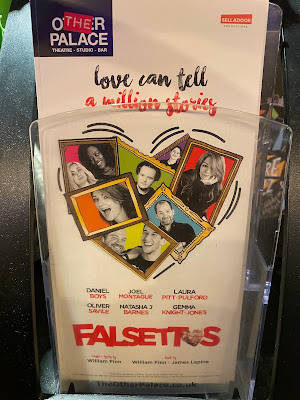 Last Friday night Stuart and I went to see the musical Falsettos at The Other Place in London's glitzy Victoria.

Set in 1979 New York City (and the years shortly afterwards) the story is told in two acts; March of the Falsettos and Falsettoland.

From the opening number "Four Jews In A Room Bitching" we knew we were in for a fun night.

The night continued with many a comedic song - notably Trina's "I'm Breaking Down" - and Marvin's touching lament to his son "Father to Son", and Mendel excellent "Everyone Hates His Parents".

During act two the plot moves from domestic squabbles to tragedy when Charlotte, a doctor, becomes aware that young gay men in the city arrive at the hospital sick with a mysterious illness that no one understands ("Something Bad is Happening").

Rumours are spreading, but the disease is spreading faster - then Whizzer collapses suddenly during a game of squash...

Much to Jason's distress, Whizzer's illness becomes more serious. Despite the former offering to get Bar Mitzvahed if Whizzer gets better ("Another Miracle of Judaism") the latter resolves to face death with dignity and courage ("You Gotta Die Sometime").

A great show that had many people around us cheering and sobbing in equal measure.
Posted by overyourhead at Monday, October 28, 2019