The Man in the White Suit @ Wyndham's Theatre... 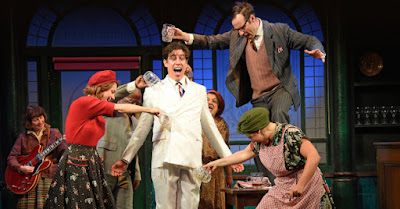 Last night Stuart and I went to see the new stage production of The Man in the White Suit at the Wyndham's Theatre in London's glitzy West End.

The reviews of the show had been tepid therefore we were not expecting much. So, when it turned out to be a bit of turkey we weren't too surprised.

The main fault is that Sean Foley's adaptation can't make up its mind what it is - a farce, a social commentary, a pantomime, a satire, a period piece, a musical - so rather than pleasing everyone; rather like the piece's indestructible fabric that never needs washing, it pleases no-one.

Fart noises? Prorogation jokes? Dropped trousers? Feeble puns? Brexit jokes? Answering a telephone that's not plugged in? Oh, come on. The tone is all over the place. And just not funny enough.

Stephen Mangan is pleasant enough however as industrial chemist Stanley who invents that indestructible fabric - but even the chemistry he has with the mill owner's daughter Daphne (played by Kara Tointon) seemed nonreactive.

The excellent supporting cast were largely wasted too; Sue Johnston as Stanley's landlady, Richard Cordery as the gammon mill owner, and Rina Fatania as a trade union leader.

In fact, the only aspect of the production that was memorable was the lighting. Which was lovely. (Joke for you there Andy).
Posted by overyourhead at Friday, October 11, 2019