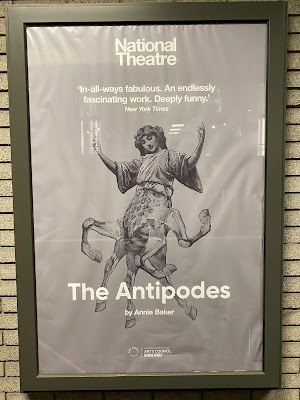 Last night Stuart and I went to see The Antipodes at the Dorfman Theatre on London's glitzy South Bank.

The actors are sitting around a table in a writers' room participating in a series of creative brainstorming sessions for an unspecified project. Judging from the boss’s opening admonition that there be "no dwarves or elves or trolls," this involves the fantasy genre. They start by switching their phones switched off, and telling, categorising and theorising various stories.

Their stories are about their lives, such as describing their first sexual experiences, the worst thing that ever happened to them and their deepest regret. The ensuing anecdotes related are often deeply personal and sometimes painful to listen to, such as a graphic account of the physical effects of a sexually transmitted disease.

However the play itself doesn't have a story - or much of one - and although there is much to admire in the acting and in the deliberately ambiguous effort, it is often bemusing or, worse, frustrating. 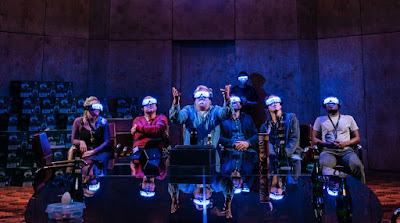 Sure, the play features many dark comedic touches, such as a video conference call with an unspecified but clearly important figure that is hampered by garbled transmissions and for which the team dons silly-looking virtual reality-type shades. There are also foreboding elements, such as the boss's frequent references to personal crises at home and the group’s nervously awaiting an approaching violent storm. The proceedings become increasingly surreal and mystical, especially when a bare-chested note-taker dons an animal skin and conducts a mysterious ritual while the others are asleep.

That message comes through loud and clear in the play about story-telling, but the obliqueness eventually proves just too frustrating. Despite its amusingly pungent dialogue and the expert performances by the ensemble, The Antipodes, which runs nearly two hours without an intermission, ultimately feels as stifling as being trapped in a conference room during an interminable meeting.

As always, Baker's writing proves provocative and insightful. But she seems to be straining too hard here for a significance that feels unearned. This play about storytelling might have benefited from having an actual story. Or at least some dwarves or elves or trolls.
Posted by overyourhead at Friday, October 25, 2019