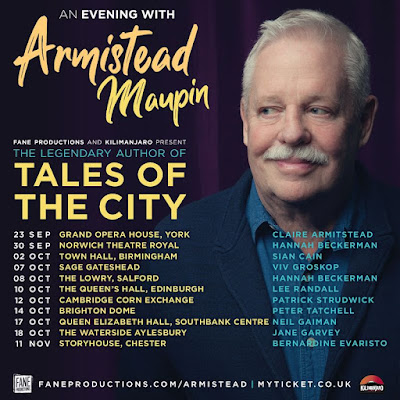 Last night Stuart and I went to spend an evening in the company of the bestselling, much-loved author and LGBT activist, Armistead Maupin at the Queen Elizabeth Hall on London's glitzy South Bank.

The author of San Francisco-based Tales of the City was in conversation with Neil Gaiman as part of London Literature Festival.

Maupin has been blazing a trail through popular culture since his iconic and ground-breaking series was first published as an 800-word daily column in the San Francisco Chronicle in the 1970s. The novel series has been taking the literary world by storm ever since. Tales of the City was followed by More Tales of the City, Further Tales of the City, Babycakes, Significant Others, Sure of You, Michael Tolliver Lives, Mary Ann in Autumn and The Days of Anna Madrigal.

And then there were the TV mini-series too - the most recent of which was the much-anticipated Netflix one, starring Laura Linney, Olympia Dukakis and Ellen Page. That one got more mixed reviews than the others though - but Maupin said he loved it.

Now aged 75 and married to photographer Christopher Turner, he has left San Francisco and moved to Clapham: "My husband and I just wanted to experience London with a greater intensity and England as well. Both of us had spent time here before. I have some relatives and old friends here. It wasn't a rejection of San Francisco it was just embracing a new adventure."

In the first half of the evening America’s ultimate storyteller, recounted some of his favourite tales from the past four decades, offering his own engaging observations on society and the world we inhabit.

Anecdotes included his deep conservative past, his LGBT activities, meeting Richard Nixon (with the odd "cock-sucker" expression inserted "to made the auditorium's sub-title person work for their money"), his first sexual experience in Battery park, and how a very special member of his logical family (the aforementioned Laura Linney) named her daughter 'Armistead' "which was nice - it's usually a name only given to lesbians' dogs!"

A minor quibble might be that Neil Gaiman's questions were at times a little indistinct and he ended up answering them himself. But that aside - and especially in the second half of the evening - when Maupin read from his autobiography and answered questions tabled from the room - he shone.

Q: "Which of your characters would you have sex with?"
A: "The actor who played Ned Lockwood (Ted Whittall) in Further Tales of the City. Sorry cheat answer but he was hot and hung!"

Q: "Which of your characters are you most like?"
A: "I wanted to be like Michael. I say I'm most like DeDe. But people tell me it's Mary-Ann!"

Q: "What advice would you give upcoming artists?"
A: "Write your truth. Write because you have to. Don't think you'll make any money!"

Maupin also gave us the heads up on a new tenth volume 'Mona of the Manor' set in the 1980s coming soon. "I am starting on a new novel, which is actually a Tales of the City novel, that goes back in time to a period that I didn’t cover before when Mona Ramsey, Mrs Madrigal’s daughter, inherits a manor house in the Costwolds from her husband whom she married to get him a Green Card so he could go to the States and be gay.
"I left her there and I never told what happened and I thought ‘oh, I would love to write about that’. I have never told the story of Mona and her aboriginal teenage son and how she fits in that village and what it is alike to live in the era of Margaret Thatcher when you are a proud American lesbian. So there’s some stuff that I can chew on there."

If you can catch the tour. Do.

Posted by overyourhead at Friday, October 18, 2019