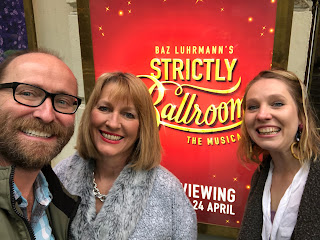 I was Joanna's birthday and so it was a special treat.

I'd like to give you a full review of the show but sadly I can't - due to a burst water pipe the show was cancelled just before the interval.

What we did see was good if not great. It was about 80% as good as the film - the script being almost word for word the same and the Australian accents and humour largely intact.

Will Young plays a new character "Narrator" which I feel was a little bit of a misstep though. He wandered amongst the action grimacing and reacting to the plot which was a little off-putting. We don’t need signposts as to what is funny. But that aside, it was good.

He sang beautifully though - with Time After Time being a stand out moment. The dancing was great too and the humour was all there. It perhaps just needed to be a bit better rehearsed. Something that will come as the previews progress.

We've rebooked for early May. It should give them a chance to fix some of the issues.

I just need to try and convince ATG they owe me a refund as per their Ts and Cs!

But do remind me to never go for the opening night again!

Posted by overyourhead at Wednesday, April 04, 2018