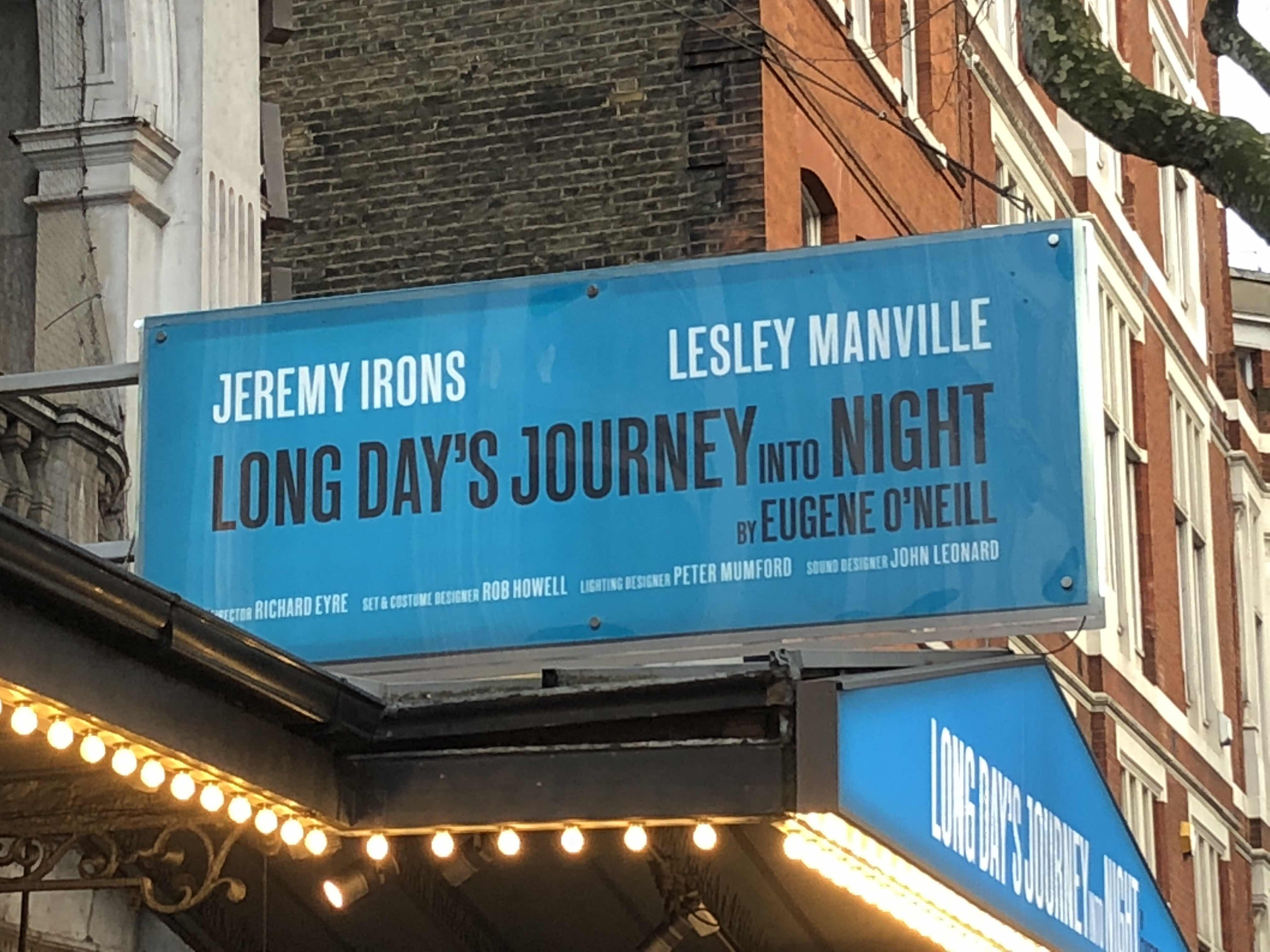 Last night Paul and I went to watch the Richard Eyre directed production of Long Day's Journey Into Night at the Wyndham's Theatre in London's glitzy West End.

Eugene O’Neill did not intend his semi-autobiographical, sprawling masterpiece, to be performed until 25 years after his death (a wish overruled by his widow). This fact perfectly captures the sense one has throughout of transgression, breached secrets, the burden of family. The play is, at three-and-a-half hours long, a marathon to watch, a pessimistic consideration of the potentially tragic human predicament that people remain, inescapably, themselves. The audience’s sense of being trapped in the auditorium mirrors what the characters feel on stage.

The play is set in a seaside town in Connecticut in 1912 and stars Jeremy Irons as James Tyrone, thespian father of the family. He is a loud, harrumphing, miserly, moustachioed presence who treads the boards in his own house, offering bursts of Shakespeare in hammily declamatory style. But he also brings cadaverous suffering to the role – this is a man who has been through more than 35 years of marriage as a soldier might a war. Irons is splendidly at home in the part.

The night belongs to Lesley Manville however. In an award winning performance, she plays the emotionally itinerant mother, Mary Tyrone. Her performance is a tour de force. Mary is a hysteric for whom unhappy laughter is oxygen. Laughter buoys her up, drags her down, reveals and conceals her. She is full of breathlessly agitated, liverish talk. She is lonely in company. She is addicted to morphine because to be awake is torment. Her desperate, compulsive talking continues even when no one is listening. At one point, she is reduced to confiding in Cathleen, the Irish maid, played by Jessica Regan with comic aplomb. Mary talks in order not to hear news she already, on some level, knows – that her son Edmund has consumption. The play will not leave this idea alone: "We know what we are trying to forget."

The Tyrone have two sons. As Eugene O’Neill proxy Edmund Tyrone, Matthew Beard is fastidious perfection: a languid mummy’s boy and poet. Refinement of mind, sulks and sickness are precisely conveyed. By the end of the night, he is barefoot and in black, as though rehearsing to be his own undertaker. Rory Keenan as Eugene O’Neill's brother proxy James Tyrone Jnr is also tremendous: a drunk with heart. He looks dishevelled with the floppy braces of a layabout and hectors his family as the sweet scent of his pipe tobacco wafts into the stalls.

It is a play depicting a grim family portrait. A play about what it is to feel homeless at home.

But it is a play worth seeing. Even at three-and-a-half hours.

Posted by overyourhead at Thursday, April 05, 2018