Quiz - a fun night but perhaps not a great one @QuizThePlay Noël Coward Theatre @mrJamesGraham... Review -> 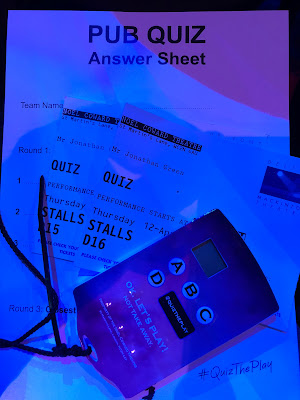 The production has just transferred following a successful run at Chichester Festival Theatre and has attracted four and five star reviews in its new home. I'm not sure I'd go that far though. It is not in the same league as Graham's other recent successes: Ink, This House and Labour of Love – for which he just won the Olivier Award for Best New Comedy.

The show is directed by artistic director Daniel Evans, Quiz has design by Robert Jones, with lighting by Tim Lutkin, music and sound by Ben and Max Ringham, video by Tim Reid and movement by Naomi Said.

Gavin Spokes plays Charles Ingram, also known as "the coughing Major" when he hit headlines for cheating on Who Wants To Be A Millionaire? He is joined by Stephanie Street as wife Diana Ingram and Keir Charles as host Chris Tarrant.

The Ingrams were convicted of "procuring the execution of a valuable security by deception" in 2003, two years after Charles won £1,000,000 on the programme.

My issue with the play is that it is perhaps too enslaved to (and in awe of) the Who Wants To Be A Millionaire? format rather than to the affect it has on those around it. It harnesses the obsession with the TV show in the shape and setting of his play and yet then seems to use that very obsession to critique it. It criticises the selective presentation of the facts and then without irony does that same thing itself. Cake and eat it. 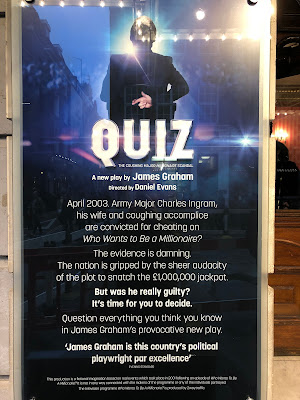 That said, there is much fun to be had with the pub quiz during the show, the guilty/not guilty audience voting, the nostalgia of revisiting old game show formats (complete with audience participation), and Keir Charles's turns as Des O'Connor in Take Your Pick!, Jim Bowen in Bullseye, Leslie Crowther in The Price is Right are a joy.

So, a fun night but perhaps not a great one.