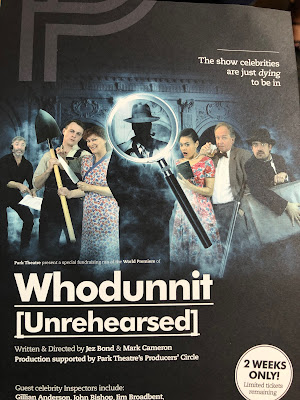 Last night Stuart and I popped along to the fundraiser at the Park Theatre in London's glitzy Finsbury Park to see Whodunnit [Unrehearsed].

Created as a way to make money for the theatre - it needs £300,000 a year to keep the lights on, gets no Arts Council or local council money - the annual fundraiser this year took the form of a murder-mystery parody with a twist. The twist being that there was a different celebrity each night playing the inspector from Scotland Yard who comes to solve the crime. Their lines and stage directions are fed to them via an earpiece - one at a time. Hilarity ensues.

Various celebrities are slated to appear. We were "lucky enough" to get Adam Hills - Australian comedian and radio and television presenter. Nice enough chap, but not what you might think as top draw. They had Damian Lewis the other night, Jim Broadbent too, and Joanna Lumley, Gillian Anderson, Ronan Keating, John Bishop, and Catherine Tate were all due. Hey ho.

The plot of the piece is dire of course, the performances pantomime, and the jokes lame - but it was all in a good cause. Moreover, the Q&A afterwards made us warm to Mr Hills much more. His element is clearly comedy rather than seat-of-your-pants acting!

The Park Theatre does lots of work for schools, for various disabled groups, and for the community. It keeps its ticket prices low and offers its theatre space out for a large number of community groups. In addition, it puts on some great shows too. So, well worth supporting.