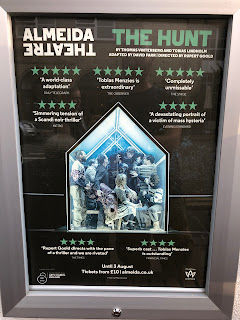 Last night Stuart and I went to see The Hunt at the Almeida Theatre in London's glitzy Islington.

It begins with the house lights up, and a school-teacher extolling the virtues of Lucas, the newest teacher at the Sunbeam Infant School in a small Danish town, who has just organised the harvest festival celebrations. It ends in darkness. In between, The Hunt has taken us to the deepest, most frightening recesses of the human soul.

In fact if you know the deservedly acclaimed film on which it is based – written by Thomas Vinterberg and Tobias Lindholm – David Farr's stage version is not so much a re-telling as a gloss, finding different beats and emphasis in the story of Lucas, a calm, kind man in a small, isolated community whose life is destroyed when he is accused by his best friend's six year-old daughter Clara of molesting her.

The important thing about the story is that we know Lucas is innocent. This is not an investigation of the impulses that lead a good man to do a bad thing, rather it is a tightly-wrought, intense, terrifying study of how a community that prides itself on being tolerant and welcoming can become a violent, excluding place, how friendships can be torn apart and lives destroyed by a moment in which everyone tries to do the right thing.

The key to Rupert Goold's production – a remarkable example of this director's ability to combine flamboyance and control – is Es Devlin's set which builds a circle of blond smooth wood and sets within it a sort of greenhouse, its frame outlined in bright light (courtesy of Neil Austin) with windows that switch from clear to opaque, that becomes a classroom, a hunting lodge (packed with grunting shouting men) and a church. It represents both a place of safety and a source of threat, enabling the staging (brilliantly choreographed by Botis Seva) to unfold around and within it, with ratcheting levels of tension.

The story, carefully structured by Farr (who adapted The Night Manager for TV) unfolds with the breath-suppressing clarity of a thriller, but it is the mysteries of the heart that provide the stress. It is rooted in performances of such rigorous truthfulness that barely a note seems out of place. Everyone is excellent, including Michele Austin as the well-meaning teacher and Poppy Miller as Mikala, Clara's chaotic mother.

But the casting of Tobias Menzies as Lucas is a stroke of genius; he is an actor who always seems to have something hidden, the control of his face concealing secrets beneath, a ticking muscle at the side of his mouth an indication of emotions fiercely under control. The scene between him and Clara (played on press night by Taya Tower with almost unbearable intensity) has a grave gentleness which makes subsequent events all the more unbearable; another with his supportive, wild-limbed son Marcus (Stuart Campbell) aches with love unexpressed, feelings unspoken.

It is that balance between what is said and what lies unsaid that makes this version of The Hunt so suspenseful. When Clara's father Theo (a raging Justin Salinger) confronts his oldest friend with what he is supposed to have done, an entire lifetime both shared and separate lies between them. Lucas has always been part of this community, united by its tribal rituals, its love of the hunt, but he has also always been different. "None of us are open books," he says, quietly.

That examination of human fallibility, of the flaws that make us who we are, of the complicated emotions that drive and control society makes The Hunt a very fine piece of work indeed.
Posted by overyourhead at Friday, July 26, 2019