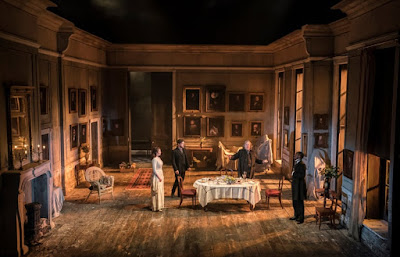 Last night Stuart and I went to see Ibsen's Rosmersholm at the Duke of York's Theatre in London glitzy West End.

Wow! What a play! What a production! What performances!

OK, full confession, I love Ibsen. His characters are always brooding, sparse, emotional, oppressive, miserable, dark, and tragic. What's not to like? But, this production of this play deserves all the five stars being heaped upon it by the critics.

Rosmersholm is full of the ghosts of the past. Sombre portraits line the walls looking down and judging the current occupants. Landlord, and recently bereaved ex-pastor, Johannes Rosmer (played perfectly by Tom Burke) is struggling to cope with the gaze. He has not only lost his wife to suicide but also his faith. And his politics have taken a left turn thanks to Rebecca West who has blown in like a wind from her eponymous direction.

Rosmer’s brother-in-law, Kroll, vividly played by Giles Terera, is a right-wing bigot whose views are even disowned by his wife and children. He marches in to Rosmersholm criticising the pairs' naive socialist views. There is an election tomorrow that Kroll wants to win and having Rosmer wander off to the left politically helps him none. He sees Rebecca as a problem - so starts to dig for dirt...

Atwell gave an award-winning performance. We hung on every word.

The rest of the cast are incredible too, especially Peter Wight as a tattered visionary and Lucy Briers as the wise and watchful housekeeper. Ian Rickson’s production is breath-taking.