The Night of the Iguana @ Noel Coward Theatre... 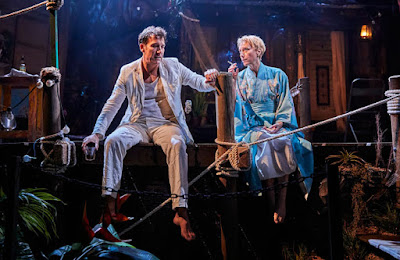 Last Friday night Stuart and I went to see Tennessee Williams's The Night of the Iguana at the Noel Coward Theatre in London's glitzy West End.

Now, there is top-tier Tennessee Williams – The Glass Menagerie, A Streetcar Named Desire, Cat On A Hot Tin Roof – and then there are scores of other plays by the deified American dramatist, ripe for rediscovery. The Night of the Iguana is not exactly scraping the bottom of the barrel, but it’s not the cream of the crop either.

The play is certainly sensuous and humane, but a little over-baked. Essentially, about redemption and the hope that people can offer one another - it wears its colours a little too brightly and shows its hand a little too soon.

The Night of the Iguana is about a disgraced Episcopalian minister-turned-tour-guide and the companionship he finds in a 1940s Mexican hotel with a New England spinster, her elderly grandfather and the establishment’s widowed owner. 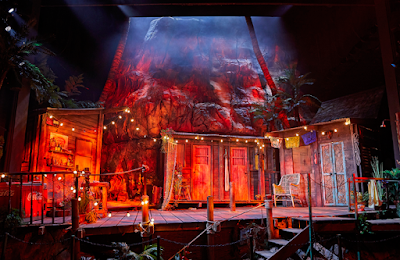 This new production is directed by James Macdonald and stars Clive Owen as our anti-hero minister – making his first West End appearance since 2001 – as well as Lia Williams, Finty Williams, Julian Glover and Anna Gunn.

Owen has the right nervous intensity and he gives a good account of a man engaged in a battle with himself. His funny but and frazzled performance is akin to Nicolas Cage in one of his better films.

He starts the evening as a nervous fidget, pacing the stage, calling out God and sneering at any social or sexual convention that might cross his path and then some, before nosediving into paroxysms of delirium, eventually emerging at the end of the evening with a palpable touch of grace. It’s a great effort, if not always convincing.

His co-stars Lia Williams and Anna Gunn, however, are magnificent.

Gunn is beautifully un-vain and carnally vivacious as hotel owner Maxine, to whom she lends a radiant sensuality that belies her profound loneliness and rampant jealousy. 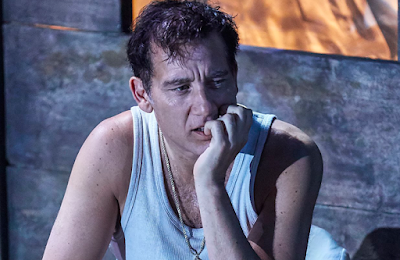 Williams, meanwhile, is simply spellbinding and astonishingly moving as spinster Southern belle Hannah. The character of Hannah Jelkes is a fascinating one. More robust than many of the playwright’s women – strange, sad and graceful at the same time, pleasingly at ease with herself. Williams captures all of this, and more.

As for the set, Macdonald's production of a majestic creeper-strewn mountaintop is great, as is Neil Austin’s lighting, Max Pappenheim’s sound, and Rae Smith’s design.

So, in summary, a great production, lovely acting, but, sadly, a rather underpowered play.
Posted by overyourhead at Wednesday, July 24, 2019