Wife @KilnTheatre "Nora as a queer icon, and lashings of regret, love, flamboyance, laughter and tears." 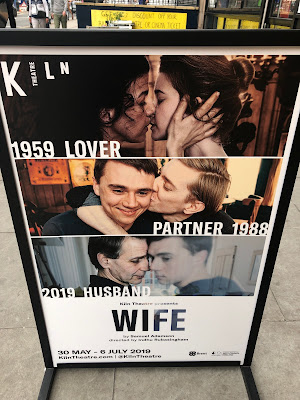 The play is a comedy - but like all comedies, has a strong line in tragedy running straight through it.

Set in three periods - 1959, 1988, and 2019 - the story mirrors, and in some ways follows on from, that of Ibsen's Nora leaving her husband at the end of The Doll's House. A sound of a door closing that was heard around the world.

In 1959, we meet Daisy who is at a crossroads. Married to Robert but in love with Suzannah, we first see her back-stage just after she and Robert have finished watching Suzannah play Nora on stage. Will Daisy leave her husband for the woman she loves?

Fast forward to 1988 and two gay men are in the pub having just watched another production of The Doll's House. Their relationship is also on the skids. How does Daisy fit in? That would be telling. But, it's funny - Kevin Elyot funny.

Finally, in 2019 the whole story comes together. This time we see a gender-swapping Doll's House, the fallout from the previous brief encounters, Nora as a queer icon, and lashings of regret, love, flamboyance, laughter and tears.