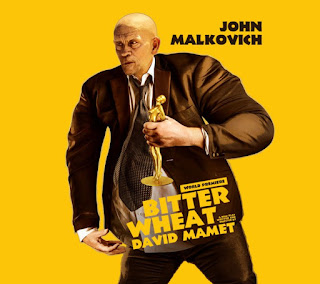 Last Friday night Stuart and I went to see Bitter Wheat at the Garrick Theatre in London's glitzy West End.

This new play starring John Malkovich in his return to the stage after 33 years is written and directed by David Mamet (in a good mood.) Because getting he mood right is important. It is a play about sexual abuse. And it is indeed a controversial play. But Mamet knows what he is doing and it tip-toes the line between humour and tragedy rather skilfully.

You laugh at, never with, the villain.

Blatantly about disgraced, depraved Hollywood producer Harvey Weinstein, we are to take it as read that everything in Hollywood is for sale except the awards, which are for rent. Bitter Wheat spares us nothing.

It rips the pashmina off the suppurating wound, which is show business, with the idea it will leave us better human beings, and fitter to once more confront the horror of life.

Our hero, Barney Fein, is a bloated monster – a studio head, who like his predecessor, the minotaur, devours the young he has lured into his cave. His fall from power to shame is a mythic journey which has been compared to The Odyssey by people who claim to have read that book.

Scarves, mothers, scripts, films, hotel rooms, racism, and sushi all have their roles to play - but at it's heart it is a play about a pantomime sex-pest villain who ruins the career of all he come across.

Only the cynical could not take any comfort from our hero's fall.

Funnier than The Iceman Cometh – more chaos than Richard III, and without all the stupid, so called ‘poetry’. Money, sex, power, you only need one of them to see Bitter Wheat.

Malkovich best role in years. 33 years to be exact.

Posted by overyourhead at Wednesday, June 12, 2019