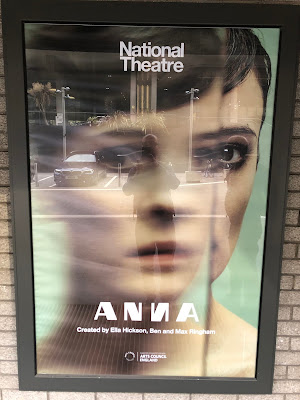 Last night Stuart and I went to see ANNA at the Dorfman Theatre on London's glitzy South Bank.

The piece has been created by playwright Ella Hickson (The Writer) and sound designers Ben and Max Ringham. It's a tense cold-war thriller. And has been directed by Natalie Abrahami. (OK, so far?)

The play is set in 1968 East Berlin. It uses individual audio headsets to give each audience member intimate access to events as they unfold over one evening. The cast perform in a huge glass box that encompasses a communist-controlled East Berliner apartment. The evening in question is a party held to celebrate a work promotion. (How am I doing? Just setting the scene. No plot spoilers yet, right?)

The person who has been promoted is Hans (played by Paul Bazely) and the party is for his work colleagues and neighbours. Anna (played by Phoebe Fox) is his wife.

So, we are listening in on a play in a box; like GDR phone-tappers. A GDR that ruled as much with surveillance, tapes, and taps as by overt terror and propaganda. Who to trust is the question; the answer, probably no one. And is trust enough? Love vs duty, personal vs party; what it’s like for the face of your deepest trauma to walk through the door unannounced.

It is a riveting 65 minutes with a multi-layered plot worthy of Le Carré and with a fascinating wizard-level sound design. Impressively intelligent, clever, layered and engrossing. And Phoebe Fox is outstanding.

I can pay no greater compliment than as you leave the theatre you have fun going over in your mind what you have just seen - who was lying, who could you trust, and who the bad guys really are.

Another fun night out at the Dorfman. If that is not a spoiler.
Posted by overyourhead at Thursday, June 06, 2019