Stanley Underhill: Coming out of the Black Country @Islingtonlibs @IslingtonMuseum 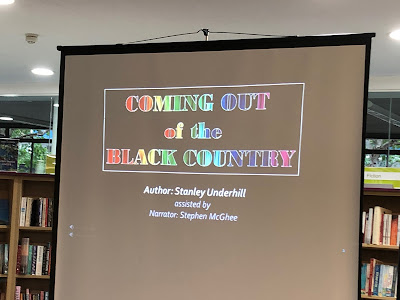 Last night Stuart and I went to a book reading, presentation, and Q&A by ninety-two-year-old Stanley Underhill, one of 41 Brothers at The Charterhouse Islington, held at Finsbury Library in London's glitzy St John Street.

Underhill's book, an autobiography, Coming out of the Black Country, is as fascinating and disturbing as it is inspiring.

Underhill describes the struggles that he went through to try to come to terms with being homosexual and details the disastrous consequences driven by his ambition to become a straight man. It also shows the cruelty and ineffectiveness of attempts at conversion therapy.

Stanley Underhill was born in 1927, in the Black Country. When he was only a toddler, his family was plunged into poverty. Living through the great depression, he was subjected to bullying and rejection by his father for his feminine ways. On leaving school on his fourteenth birthday, he became a compositor at a printing works in Birmingham. 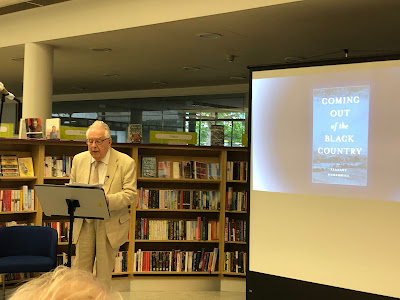 In 1945, he was called up and served in the Royal Navy as a Naval nurse - briefly finding love at sea. After demobilisation in 1948, he studied and qualified as an accountant. But his love-life led to betrayal and then to depression and incarceration. He underwent psychotherapy, conversion therapy, testosterone injections, with no success, and attempted suicide.

Even as an accountant his partners were homophobic bullies who hounded him out into practising by himself. And then in 1976, he joined the Anglican Society of St. Francis. After five years with the Society he was ordained and served in the dioceses of Southwark, Lichfield and Canterbury and finally as a Chaplain in the Diocese of Europe. In 2003, he became a Brother at the London Charterhouse where, in his mid-eighties, he began writing his autobiography.

Towards the end of his tale, he quotes the advice that Polonius offers to his son, Laertes, in Shakespeare s Hamlet: "above all, to thine own self be true." He could hardly have anticipated that this advice would precipitate in himself a lifetime of self-examination and searching and serve as a crucial leitmotif that would recur throughout both his adolescence and entire adult life as he grappled to reconcile his faith and sexuality.

Coming Out of the Black Country is a story of survival, forgiveness, and a testament to the power of personal faith and love.
Posted by overyourhead at Wednesday, June 19, 2019