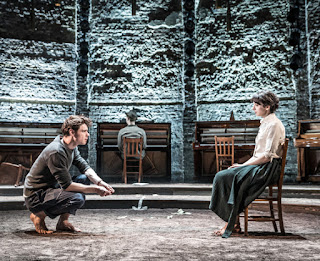 Last night Stuart and I went to see a preview of Tennessee Williams' play Summer and Smoke at the Almeida Theatre in London's glitzy Islington.

Directed by the marvellous Rebecca Frecknall this production stars the excellent Patsy Ferran as Alma, an unmarried highly-strung minister's daughter who experiences a complicated, transformative romance with John, the wild undisciplined young doctor who grew up next door, played by the equally excellent Matthew Needham.

It's the heat of summer and Alma is trapped between desire and fear in a life of obligation. Her world turns upside down in the search for salvation.

Alma and John's spiritual/sexual romance nearly blossoms a number of times. She, ineffably refined, identifies with the Gothic cathedral, "reaching up to something beyond attainment"; her name, as Williams makes clear during the play, means "soul" in Spanish; whereas John, doctor and sensualist, defies her with the soulless anatomy chart.

As the play progresses, however, John and Alma seem to trade places philosophically. She transforms beyond modesty. She even throws herself at him, saying, "now I have changed my mind, or the girl who said 'no', — she doesn't exist anymore, she died last summer — suffocated in smoke from something on fire inside her.". But he has changed too. He is engaged to settle down with a respectable, younger girl; and, as he tries to convince Alma that what they had between them was indeed a "spiritual bond", she realises, in any event, that it may be too late. In the latter scenes, Alma accosts a young traveling salesman at dusk in the town park. Will she follow her new-found lusts to enjoy the "after-dark entertainment" at Moon Lake Casino, where she had resisted John's attempt to seduce her the summer before, or will she keep her "soul" pure?

It's a joyous, intoxicating, delicious treat about love, loneliness and self-destruction.


Incidentally the play was made into a film back in 1961 and got four Oscar nods including one for Geraldine Page as Best Actress.