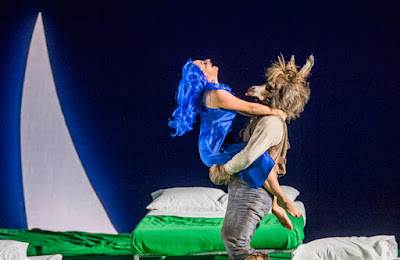 Last night Paul, Stuart and I went to see a striking revival of a rather naughty production of Benjamin Britten's A Midsummer Night's Dream performed by the English National Opera at the London Coliseum in London's glitzy West End.

Based on Shakespeare’s popular comedy, Britten’s opera follows the consequences of a falling-out between the green-haired fairy-king Oberon and his blue-haired fairy-queen, Tytania. It leads to mistaken identities, confused lovers and a donkey having sex with a fairy.

Actually there is a quite a lot of sex in the show. As there should be. Shakespeare's play is essentially a sex-comedy.

Robert Carsen’s production explores the blurred relationships between reality and dreams, the natural and supernatural, and - yes - said sexual desire.

From the sliding string chords of the magic wood to the rustics’ well-intentioned entertainment at the end, Britten’s ear for beguiling orchestration and melodic invention enchant and entice.

Leading the cast as Oberon and Tytania are counter-tenor Christopher Ainslie and soprano Soraya Mafi. The roles of the lovers are taken by a quartet of rising stars – Eleanor Dennis as Helena, Clare Presland as Hermia, David Webb as Lysander, and Matthew Durkan as Demetrius. Young British conductor Alexander Soddy makes his ENO debut.

We loved the show - it was beautiful to watch, with its lush green and white set - very funny, Bottom and Puck both playing it for laughs - and the time just flew by, although the joke about "filling the 3 hours between supper and bedtime" wasn't lost on the crowd.

Maybe it's not up there with the sublime Peter Grimes but it is a great introduction to Britten and to the world of opera in general if you fancied taking the plunge.
Posted by overyourhead at Thursday, March 15, 2018