Harold and Maude - we loved the film so had high hopes for the show. We weren't disappointed. It is a delight. @thomsoutherland #HaroldandMaude @CharingCrossThr ... 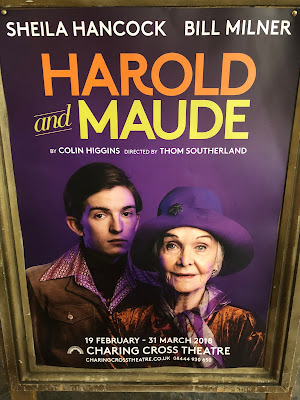 Last Friday night Stuart and I braved the snow to go and see Harold and Maude at the Charing Cross Theatre in London's glitzy West End.

Starring Sheila Hancock and Bill Milner and produced by Thom Southerland the play is based upon the American romantic black comedy drama 1971 film of the same name.

We loved the film so had high hopes for the show. We weren't disappointed.

Equal parts dark comedy and romantic innocence, Harold and Maude is an idiosyncratic romantic fable told though the eyes of the most unlikely pairing: a compulsive, self-destructive young man and a devil-may-care, septuagenarian bohemian.

Dame Marjorie "Maude" Chardin (Olivier Award-winner Sheila Hancock), is a free spirit who wears her hair in braids, believes in living each day to its fullest, and trying something new every day. Harold Parker Chasen (Bill Milner) is an 18-year-old man who is obsessed with death, attends funerals of strangers for entertainment and stages elaborate fake suicides. Through meeting Maude at a funeral, he discovers joy in living for the first time. Harold and Maude dissolves the line between darkness and light along with ones that separate people by class, gender and age.

The reviews have been a bit sniffy but we really enjoyed it. Yes, it was quirky, fanciful, peculiar, quaint and full of so much whimsy you'd think they would even throw in a honking seal for good measure (spoiler alert: they do.) But the sheer charm of the piece, the sadness and the lightness of touch simply won us over.

I'll not give away the ending but I think it's fair to say many didn't see it coming.

A delightful night out. Despite the snow.
Posted by overyourhead at Tuesday, March 06, 2018