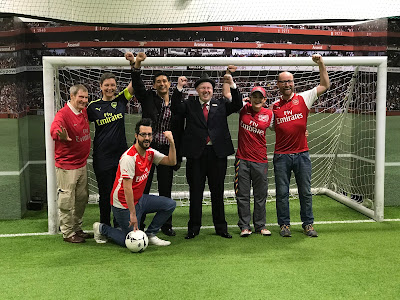 Yesterday was a fantastic day for the Gay Gooners, for the Arsenal for Everyone diversity initiative, for Arsenal Football Club's profile, and for me personally.

Prior to the midday kick-off of Arsenal FC against Brighton and Hove Albion (which we later won 2 - 0) Lea, Chris, Dave, Rosemary, Thierry and I went to the Arsenal Hub to take part in a penalty shootout against the Proud Seagulls (Brighton and Hove Albion's gay supporters group). We didn't score a single goal. Pretty foot work though! Ha! So Arsenal! Jokes all round.

Matt Lucas turned up too which was great so we got to chat with him and take some snaps.

There was some French TV media there as well so being the shy sort of person I am I launched myself at them with my half-baked ideas of how the men's game needs to change to be more welcoming to gay supporters and to look to support any male players should they want to come out. I told them about straight-on-straight homophobic abuse and how that affects gay supporters, how abuse had changed over the years, and bigged up Pride in Football and the Gay Gooners and told them what a great job Arsenal FC did to support us and how Gay Gooners are the biggest and the best gay supporters club in the world. We didn't conduct the interview in French(!) so I'll be intrigued as to how they are going to put French subtitles to some of my Arsenal slang! Oop Ze Arze-nel! 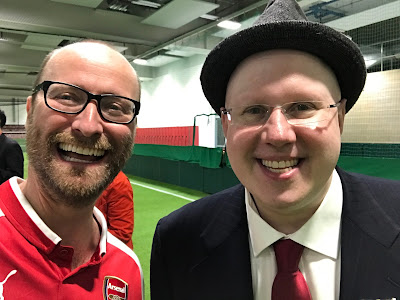 After that a BBC TV crew wanted a go with us all so we chatted to them too. When it came to Lea and my turn we played a bit of a double act being interviewed together. It was very funny and hopefully we got some of our points about homophobia, what the clubs need to do and our passion for the game. After the match the TV crew wanted to do some 'pick up' shots so we walked towards the camera and away from the camera a dozen times together feeling very self-conscious. We joked we should have had people doing our hair, our make-up and maybe even a fluffer(!)

During the game itself Arsenal broadcast on numerous occasions the Arsenal for Everyone pitch-side video banner along with its rainbow ending. Then at half time Matt Lucas was interviewed on the pitch about being a gay fan, his support of the Gay Gooners, and how his autobiography was on sale now(!) Our new Gay Gooners banner was shown a couple of times during the piece and my heart swelled with pride. The club I love, in the stadium I love, was very openly telling me I was accepted as a gay man. This made me very happy. Very. 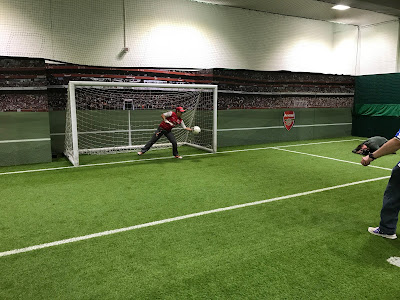 And during the game or especially during the half-time interview there was no homophobic chanting near us. I was relieved as it's a lively bunch near me who aren't normally backward about coming forward with their banter. Then I saw someone shaking their head slowly… and I then speak up... oh no... here it comes... a negative comment... and all he said was, "it's meant to be fucking Arsenal for fucking Everyone day and all Matt fucking Lucas is doing is plugging his fucking book!" I almost spat my cola out! We all laughed though. For the right reasons I think. Banter is alive and well at the Emirates! Happy days! 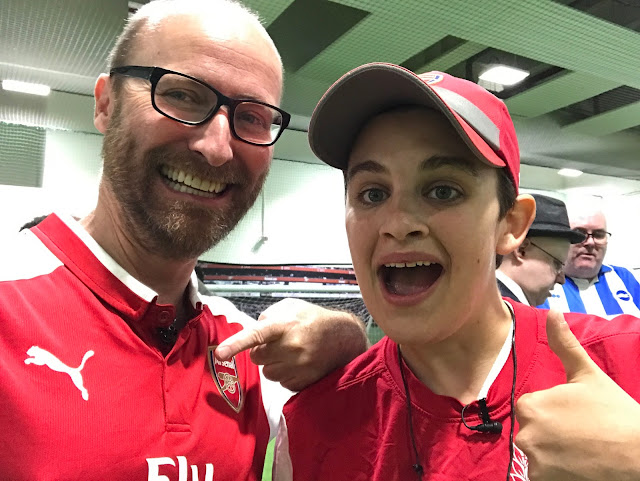 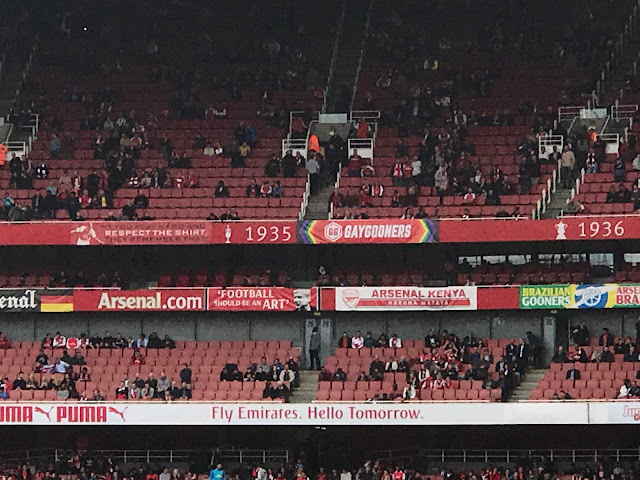 Posted by overyourhead at Monday, October 02, 2017