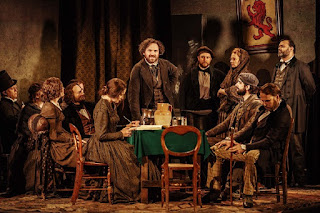 Young Marx stars Rory Kinnear in the title role and Oliver Chris as Friedrich Engels and reunites the creative team of Bean's previous hit play One Man Two Guvnors (which premiered at the National Theatre), directed by Hytner, designed by Mark Thompson, music by Grant Olding, lighting by Mark Henderson and sound by Paul Arditti.

Creditors, spies, rival revolutionary factions and prospective seducers of his beautiful wife all circle like vultures. His writing blocked, his marriage dying, his friend Engels in despair at his wasted genius, his only hope is a job on the railway. But there’s still no one in the capital who can show you a better night on the piss than Karl Heinrich Marx.

Kinnear and Chris are both great. The writing is funny, and there is a lot of vaudevillian, hammy role-playing, and slapstick humour to be had. But there is perhaps something slightly missing from the whole show though. Maybe it just needs a few more wry jokes about Capitalism, a bit more pathos about the terrible conditions of the Manchester cotton workers that spurned Engles on, or a simply just a few more knob gags.

Overall a great show in a great theatre. We are both looking forward to seeing what else the place has in store.
Posted by overyourhead at Thursday, October 26, 2017