I'm Only In The Bloomin' Arsenal Matchday Programme!...

Last Sunday was a dream come true for me - I was featured in the Arsenal matchday programme in the "My Arsenal" section on the inside back cover.

Here were my answers... 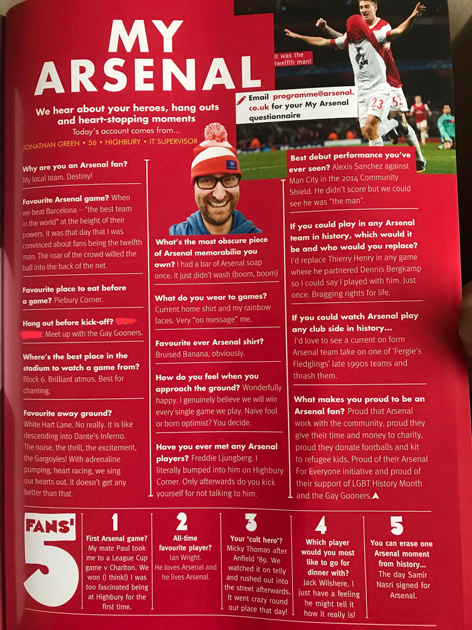 Why are you an Arsenal fan?

My mate Paul took me to a League Cup home game to watch Charlton. We won (I think!) I was too fascinated being at Highbury for the first time

When we beat Barcelona - "the best team in the world" at the height of their powers - by scoring two in the final 12 minutes. It was that day that I was convinced about fans being the twelfth man. The roar of the crowd willed the ball into the back of the net.

Favourite place to eat before a game?

Favourite place to hang out before kick-off?

Meet up with the Gay Gooners.

How do you feel when you approach the ground?

Wonderfully happy. I genuinely believe we are going to win every single game we play. Naïve fool or born optimist? You decide.

Where’s the best place in the stadium to watch a game from?

Favourite away ground and why?

White Hart Lane. No really. It is like descending into Dante’s Inferno. The noise, the thrill, the excitement, the Gargoyles! With adrenaline pumping, heart racing, we sing our hearts out. It doesn’t get any better than that.

What’s the most obscure piece of Arsenal memorabilia you own?

I had a bar of Arsenal soap once. It just didn’t wash (boom, boom)

What do you wear to games? (A current shirt or a vintage one? Arsenal jacket/hat/scarf/lucky pants?)

Current home shirt and my rainbow laces. Very “on message” me.

Whose name and number do you/would you have on the back of your shirt?

Lacazette. I got it the day he signed but I didn’t know his number so had to go back to the Arsenal shop to get it added later.

Who is your all-time favourite player and why?

Ian Wright. He loves Arsenal and he lives Arsenal.

Do you have an Arsenal ‘cult hero’ and why?

Micky Thomas after his 1989 League title-winner from Alan Smith’s flick-on. We watched it on telly and rushed out into the street afterwards. It went crazy round our place that day!

What’s the best debut performance you’ve ever seen by a new player?

Most impressive for me was Alexis Sánchez on his first competitive appearance against Man City in the 2014 Community Shield. He didn’t score but we could see he was "the man".

Have you ever met any Arsenal players? If so who, when, where and how?

Freddie Ljungberg. Quite literally bumped into him on Highbury Corner. Only afterwards do you kick yourself for not talking to him.

Which current Arsenal player would you most like to go for dinner with, and why?

Jack Wilshire. I just have a feeling he might tell it how it really is!

If you could erase one Arsenal moment from history, what would it be?

If you could watch Arsenal play any club side in history, who would it be and why?

I'd love to see a current on form Arsenal team take on one of Fergie's Fledglings late 1990s teams and thrash them.

If you could play in any Arsenal team in history, which would it be and who would you replace (ie, what position would you like to play in)?

I'd replace Thierry Henry in any game where he partnered the wonderful Non-Flying Dutchman Dennis Bergkamp so I could say I played with him. Just once. Bragging rights for life.

What makes you proud to be an Arsenal fan?

Proud that Arsenal work with the community, proud they give their time and money to charity, proud they donate footballs and kit to refugee kids. Proud of their Arsenal For Everyone initiative and proud of their support of LGBT History Month and the Gay Gooners.
Posted by overyourhead at Tuesday, October 03, 2017