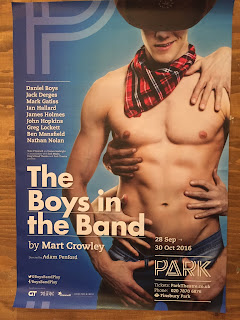 Last night Stuart and I went to see Mart Crowley’s seminal piece The Boys in the Band at the Park Theatre in London's not at all glitzy Finsbury Park.

From the producers of the critically acclaimed revivals of Beautiful Thing, Our Boys and Another Country and the forthcoming stage adaptation of Brokeback Mountain, comes this eagerly anticipated revival of The Boys in the Band which was first staged in New York in 1968 just before the Stonewall riots. The piece has had a somewhat checked past with gay audiences. Seen by some as a vicious exposure of self-loathing gay men and as others as a vivid exploration of a gay subculture under attack it was made into a film in 1970 that went to become a cult classic. The play has not been revived in the West End for 20 years.

For my part I loved the film, and I loved this particular production of the play too. It had us in fits of laughter.

It's a funny, cruel, and illuminating piece that is set in a New York apartment where Michael is hosting a birthday party for his friend Harold. Seven other guests arrive all packed with their own particular neuroses. Neuroses that have all developed one way or another because they are all homosexuals - and not particularly happy homosexuals at that. And by hiding it, not being able to express it, or expressing it all too clearly has got them all into a heap of trouble emotionally. And it's all about to come tumbling out.

If you like your theatre bitchy, bitching and heart-felt - this is the show for you!
Posted by overyourhead at Friday, September 30, 2016