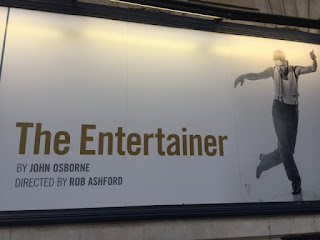 Last night Stuart and I went to see Kenneth Branagh star in John Osborne's The Entertainer at the Garrick Theatre in London's glitzy West End.

It is claimed that the "angry young man's" play is an "actor's piece" reflecting the "state of the nation", mourning the "end of Empire", a "lament to the loss of English identity" and written about "angry middle-aged man"...

Well, that"s as maybe but I think it"s just "a bit rubbish".

That said, Ken Branagh is wonderful in it as the past his sell by date aging music hall act Archie Rice. He is funny, creepy, lovable and entertaining. But all around him is wooden. The other actors, the set, the staging, the play itself.

Much like the (far superior) Oh! What A Lovely War! we are subjected to the musical treatment of family lives in ruins. The domestic unrest of each character is lubricated by gin and then segued together by a series of a smarmy, smiling song-and-dance vignettes.

And it's all a little weak - a weak plot, weak characters and jokes that get greeted by weak smiles.

Laurence Olivier created the past 60 years ago and that is perhaps where it should have stayed.

So not quite the crowning glory to end Branagh’s Season at The Garrick we might have hoped.

(Helen Bohnam-Carter and James McAvoy were both there so it wasn't a complete waste of an evening.)
Posted by overyourhead at Friday, September 02, 2016