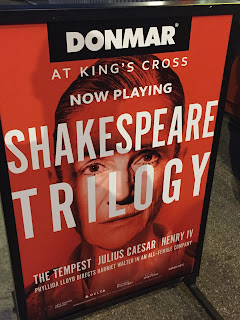 Last night Stuart and I went to see The Tempest in the temporary theatre of the Donmar Warehouse in London's trying-to-be-glitzy Kings Cross.

The all-female production is the second of Phyllida Lloyd's Shakespeare Trilogy - the three being Henry IV, Julius Cesar, and this, The Tempest.

We'd already seen the marvellous Henry IV and have Julius Cesar to come so were really looking forward to The Tempest.

As with the other productions in the trilogy the play is set in a prison with many modern references - Tracy Emin, hip-hop, Starbucks... And largely it works. The prison as a remote island metaphor is good and the old lifer as the sorcerer Prospero, rightful Duke of Milan, plotting to restore his daughter Miranda (the only female character in the play) to her rightful place using illusion and skilful manipulation is good too.

The acting is top notch and there are some clever stage tricks on display too - the audience having LED torches and the projections on the white helium balloons stand out.

Overall it was a fun show but perhaps let down a little by the source material itself - A Midsummer Night's Dream shares much of the same DNA but is way better.

(If you want to see an even better modern reworking of a Shakespearean play - Imogen is much better down at the Globe).
Posted by overyourhead at Saturday, October 01, 2016