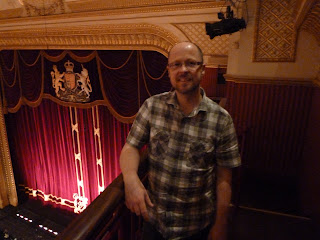 Last night Stu and I went to the ballet - to see Tchaikovsky's Swan Lake at the Royal Opera House in London's glitzy Covent Garden.

We had cheap and cheerful seats - well, I say seats - they were in the Amphitheatre Lower Slips Right i.e. standing in the gods. And we only got to see about two thirds of the stage. Which in fact was not that bad considering we only paid £6 for them. Luckily it was a symetrical production and so we didn't miss much of the action in the end.

It was a great show and despite the standing we loved each and every one of the four acts. Mind you, what's not to love about the Swan Lake? The music was as familiar as it was sublime and at the ROH the casting were - as one might expect - top notch.

As for the principals - Sarah Lamb as old swanny herself Odette/Odile was excellent, Federico Bonelli as Prince Siegfried seemed to fly around the stage but Christopher Saunders as the over the top evil spirit/von Rothbart stole the show.

It was Stu's first visit to the ROH. We'll be going back for sure.