Last night Stu, Darren and I went to see the wonderful Mary Wilson perform at the Indigo2 supported by The Chi-Lites.

The Chi-Lites were fine - gambling through such hits as Have You Seen Her?, Oh Girl, Give It Away, I Found Sunshine, A Letter To Myself etc.

After a brief interval out came the lady herself. Mary Wilson was one third of the founding centre of The Supremes, and stayed through each (six in total) line-up changes between the late 1950s and 1977. The girl showed staying power then and did so again last night. Mary's solo career then kicked off officially in 1979, and she has continued to release albums and tour globally to rave reviews and sold out crowds since. Working together with her band for 19 years and counting, they did a protean mix of standards in a delicious live instrumental environ.

La Wilson's setlist for the evening criss-crossed and embraced jazz, pop, and soul with uncanny ease, a good portion of them coming from The Great American Songbook and of course her extensive back catalogue. With a moody blue, but affirming hue overall, she glowed with a sincere delivery.

We were treated to such soul classics as:
Where Did Our Love Go?
Baby Love
Come See About Me
Stop! In the Name of Love
Back in My Arms Again
Nothing but Heartaches
I Hear a Symphony
My World Is Empty Without You
Love Is Like an Itching in My Heart
You Can't Hurry Love
You Keep Me Hangin' On
The Happening
Reflections
Love Child
Someday We'll Be Together
Bad Weather
Nathan Jones
Floy Joy
I Am Changing
Walk the Line
amongst many others

Towards the end we were treated to covers of Sting's Fields of Gold, The Rolling Stones' Satisfaction and an encore of Donna Summer's Last Dance.

Sadly nothing from Mary's eponymous 1979 album - despite calls from the floor for Red Hot..

La Wilson was funny, personal, and lively throughout the evening. The night made it crystal clear that Mary Wilson is a truly undervalued commodity amongst her Motown peers. A voice that is finally beginning to get its due, in terms of her massive Supremes contributions, and as an artist in general. Mary Wilson is the glistening example of talent that won't be held back by anyone or thing, I was glad to see it for myself in the flesh once again. 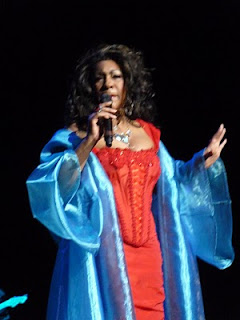 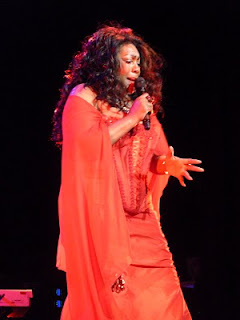 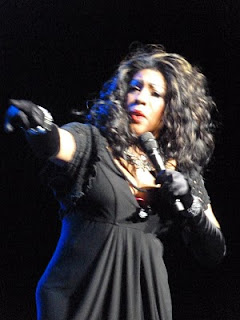 Posted by overyourhead at Wednesday, March 09, 2011