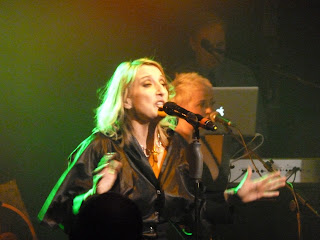 Last night Darren treated me to a night out watching Claudia Brücken at the Scala in London's glitzy Kings Cross. The lovely Paul and the gorgeous Dave also joined us as did a collection of aging funsters from the 80s.

Die Brücken was on stage promoting her recent Combined CD - a collection of her work from Propaganda days through Act, Onetwo, various duets and solo work. Last night she was joined by, amongst others, Susanne Freytag, Andrew Poppy, Andy Bell, Glenn Gregory and Martyn Ware.

It was great gig. And there was lots of love in the room. We were treated to pretty much all the album and the guest stars shone. Especially La Bell - resplendent in a twinkly suit.

Afterwards we repaired to Central Station where we bumped into Dilwyn and Lee and continued our night of fun.

The first time I saw Claudia Brücken was in May 1985 during an early promotional ZTT showcase called "The Value of Entertainment" at the Ambassadors Theatre in London. The shows also featured Art of Noise (Paul Morley addressing the audience after three dancers had performed to AON tracks), Anne Pigalle, Andrew Poppy and Instinct. Propaganda were joined on stage by former Simple Minds bassist Derek Forbes and ex-Japan drummer Steve Jansen.

Posted by overyourhead at Thursday, March 03, 2011