Last night my aim of completing the West End continued uninterrupted with a trip to see Andrew Lloyd Weber's latest, Cinderella The Musical at The Gillian Lynne Theatre in London's glitzy Drury Lane. Or 'Dreary Lane' as Stuart calls it.

The reviews of the show have been mixed to say the least, LW himself has staunchly defended it, and the woman who served me my pre-show G&T said (rather unenthusiastically), "It's fun". So, I went in with pretty low expectations.

But she was right. It was fun. But little more than that. Granted it was no 'Stephen Ward' but then it was no 'The Phantom of the Opera' either.

Welcome to Bellville! The most aggressively picturesque town in the history of the world, populated exclusively with gorgeous townsfolk who stop at nothing to achieve perfection. Bellville is a fairy tale come to life: a place where you can’t move without falling over a wishing well, a quivering milkmaid, or a bear-chested hunk of a Palace Guard.

Yes, things have been somewhat rewritten here; Cinderella is loud-mouthed, dripping with disdain, and more likely to roast Hansel and Gretel for dinner than save them. Her only friend, Prince Sebastian, has suddenly become the heir to the throne after the mysterious disappearance of his elder brother: sex god and charisma machine, Prince Charming. Suddenly thrust into the spotlight, the formerly shy and somewhat-less-sex-goddish Sebastian seems to be quickly growing into his brother’s enormous britches, and out of his friendship with Cinderella.

Meanwhile the Queen wants to save the town (and her neck) by hosting a peasant-distracting Royal Wedding. And in a plot twist as lame as the closing act in Grease Sebastian needs to realise what he's got in Cinderella before The Godmother puts Cinders under the knife and cracks a couple of ribs as she tries to make herself Palace Perfect.

Yes, the show tries to eat its Royal Wedding cake and have it.

The songs are fine, the performances are good, but the tone is a little off kilter. I shall resist quipping that the early song ‘Bad Cinderella’ is an appropriate show synopsis though - I'm above that - and so are you dear reader.

The show claims to be a feminist reimagining of the Cinderella story. A claim I might dispute as most women in this show are largely fretting about what to wear to the Ball or who they are going to marry. Yes, there are women who are captains of industry, or enjoying successful careers in law, medicine or engineering – just not here.

The men don't get treated much better mind you. One of the musical numbers is aptly titled ‘Hunks’ Song’, and is promptly followed by ‘Man’s Man’. While the show does try to portray genuine love between people who are compatible irrespective of financial standing or personal appearance, the men are largely strutting their stuff as though this were Magic Mike Live!

That said, the second half is more enjoyable than the first, if for no other reason than there is an additional treat for members of the audience sat in the front rows of the stalls; the stalls are rotated to be behind the stage and the stage in turn rotates to be within the auditorium. I was moved 30 metres from where I first sat down. Not see that done before.

On the production side, Emerald Fennell’s book has the sort of putdowns that leave the audience often laughing and occasionally gasping. JoAnn M. Hunter’s choreography sparkles in the big numbers. The set is as decent as a West End musical production would be reasonably expected to be, as is the lighting design (Bruno Peel) and the various costumes in the show (Gabriela Tylesova).

The music and lyrics make this production what it is, however – one doesn’t (spoiler alert) feel short-changed by the lack of a visible golden carriage, for instance. A decent range of musical styles are deployed, even if an early number tries too hard to emulate Six. Ben van Tienen directs a group of eight musicians ably – occasionally the orchestra sounds considerably larger than it is.

‘Only You, Lonely You’, some way into the first act, is one of those soaring Lloyd Webber melodies that ends with a Very Long Note, eliciting cheering and applause from the audience. It’s the sort of song West End audiences just adore. Me, less so.

By curtain call, things wander further from fairy tale lore too as the concept of ‘they all lived happily ever after’ is demolished; resulting in a bittersweet rather than an altogether happy ending. That said, some interesting plot twists are lapped up by the audience: when he does show up, Prince Charming’s (Caleb Roberts) choice of life partner was both delightfully refreshing if not entirely unexpected.

The stand-out performance for me was Victoria Hamilton-Barritt as a hammy Stepmother, which made the role more comedic than villainous. Her eye-brows could have their own postcode.

So, a fun night. But no more than that. 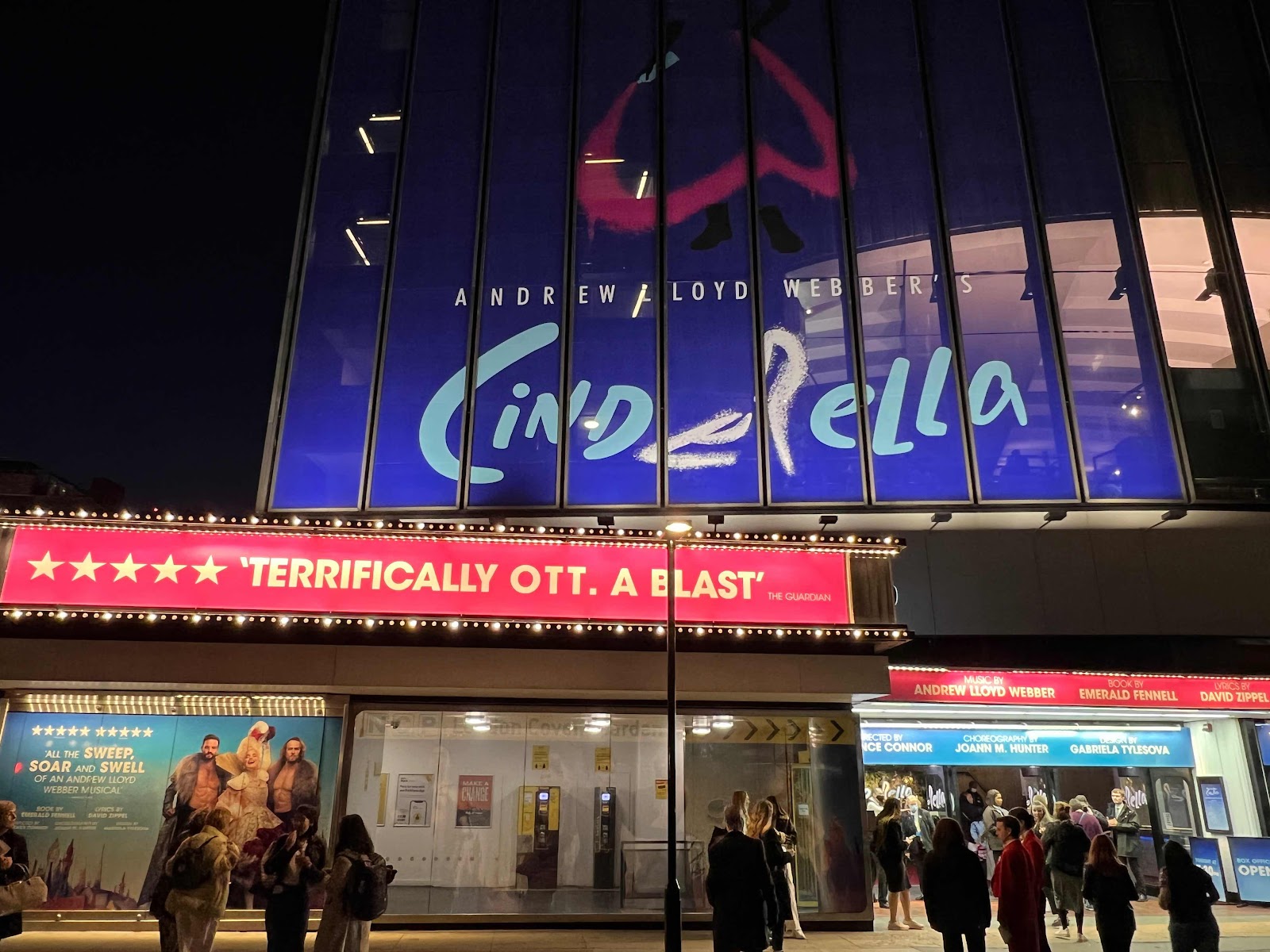 Posted by overyourhead at Wednesday, March 23, 2022