White Noise @_bridgetheatre - Be entertained, be challenged and, yes, be made to feel uncomfortable. Go see. Review ->>> 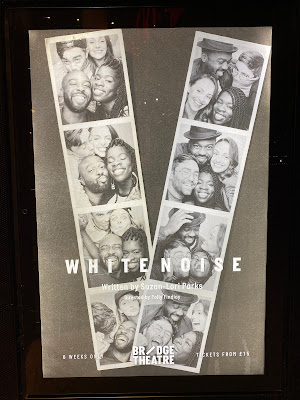 The venue sent us a content guidance before we went. Please note this play contains:
- Depictions of slavery and racial violence
- Discussions of racism and racial injustice
- Multiple gunshots
- Strobe lighting and haze throughout

They got that right!

Parks introduces us to four thirty-somethings; Leo (Ken Nwosu), Misha (Faith Omole), Ralph (James Corrigan) and Dawn (Helena Wilson) who have been inseparable since college. They were even in a band together.

We like these people. They are nice. A sort of Millennial Friends with lots of joking around. Making their way together in the Big City, they are what Americans call 'liberal', open-minded and socially aware. Misha is building her brand by live-streaming her broadly satirical one-woman talk show, "Ask a Black.”; Ralph is waiting for tenure at his university, and as a lawyer, Dawn spends her days fighting for social justice. Leo would be a talented visual artist – if only he could sleep. As best friends and lovers, confident in their woke-ness, their connection with each other is stronger than anything else – until, that is, Leo is assaulted by the police in a racially motivated incident. Shaken to the core, he brings to the close-knit group an extreme proposition.

Theatre goers wary of spoilers should look away now. ***Spoilers ahead!***

Consumed by anger with the racist police, Leo directs his rage at Ralph, challenging his white friend to pay off Leo’s student loans to rent him as his personal slave for 40 days. Leo jokes, at least as a slave he'll feel protected by his master. He says he feels like a slave sometimes anyway. And it might just help him understand his roots better and maybe even cure his insomnia.

Leo's three friends initially are appalled. But he gradually talks them round. Eventually they agree. Ralf will be Leo's master for 40 days. They all sign a contract.

Things starts off all very light-heartedly. Lots of knowing, post-modern play-acting. Although we as the audience squirm, the characters seem to be having fun with it.

However, the friends soon sink deeper and deeper into their master/slave roles. As a joke Ralf gets Leo to wear an antique slave collar — heavy, metal, aged, ugly, hurtful. It is genuinely shocking to watch.

Predictably relationships sour. As time goes by, the joking turns to awkwardness. The awkwardness to resentment. The resentment to anger. The anger to hate. The hate to violence. Yoda said it best.

At the end the woman behind us was calling out to the actors in fear, “Nooo!” The lady opposite us had her hands in front of her face.

Directed by Polly Findlay the play with its close relationships and casual couplings feels natural and unforced. But it's the content had us on the edges of our seats throughout despite its 160 mins running time. Frank discussions about race from all perspectives can and should make you feel uncomfortable. And Parks pulls no punches.

So, if you want to be entertained, to be challenged and, yes, to feel uncomfortable I don't think there is a better more vital place to go at the moment than The Bridge Theatre.
Posted by overyourhead at Friday, October 08, 2021