Love and Other Acts of Violence @ Donmar Warehouse... 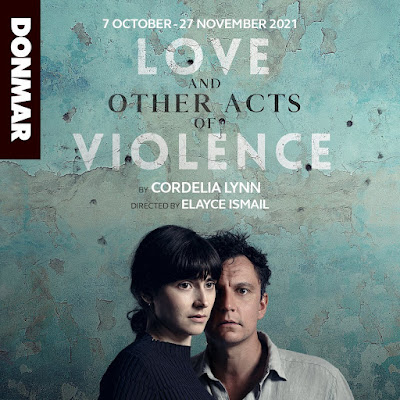 Last week Stuart and I went to see Cordelia Lynn’s new play Love and Other Acts of Violence at the Donmar Warehouse in London's glitzy Covent Garden.

Starting out as a two-hander on a bare stage with no scenery the play tells the story of the rise of Nazi Germany through the prism of an educated pair who are falling in love as around them the world turns to chaos.

She (Abigail Weinstock) is a young Jewish physicist initially in denial of what is happening around them - despite her grandmother's similar experiences in the past - and he (Richard Katz) is a left-wing poet ready to protest as each little freedom is taken away. They find it ironic and almost funny. They don't quite believe it - at first.

Their relationship is fractious, passionate, and very real. But as society splinters around them, the couple's struggle to survive erupts into violence both within their home and beyond.

Jarringly, the action then suddenly changes and jumps into the past - to the previously hinted at grandmother's own experiences of antisemitism. A full set descends onto the stage from above and a full cast of characters play out an horrific scene of family home invasion and bloody murder. It's a shocking watch.

Elayce Ismail directs the cast of Weinstock and Katz. All are excellent.

The night starts as a subversive and intimate love story about inheritance and the cycles of politics and history. But it soon descends into a very real story of just fucking horrible being Jewish must have been not only during the Nazi rise to power but for years and years before. Chilling.
Posted by overyourhead at Thursday, October 14, 2021