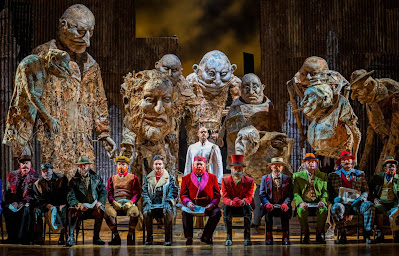 Last Saturday night Paul and I went to the Philip Glass opera Satyagraha performed at the English National Opera's home of the London Coliseum in the glitzy West End.

It was as fantastic and moving as it was the four previous times I had seen it.

It was brilliantly hypnotic. Jaw-droppingly wonderful. In has to be in the top ten best things I've seen on stage.

The opera is in three acts for orchestra, chorus and soloists. It was composed by Glass, with a libretto by Glass and Constance de Jong. It's loosely based on the life of Mohandas Gandhi. The term satyagraha is the philosophy and practice of nonviolent resistance developed by Gandhi himself.

The original director of the piece was Phelim McDermott (Shockheaded Peter) and Julian Crouch is the associate director and set designer. Boy, did they do an amazing job. The revival director is Peter Relton and he has recreated McDermott's magic.

The beauty of the sung Sanskrit is bewitching: sober sepia projections of key passages replace supertitles; but verbal comprehension isn’t really the point. Although it would be inappropriate to single out individual performances in a work that has so little to do with conventional operatic glory, Sean Panikkar’s central performance as Gandhi is a masterpiece of compelling clarity and absorption. Conductor Carolyn Kuan demands a special mention too.

Stand out moments of the night for me were:

- the amazing floating coat hangers and the equally amazing floating lights lifted up high above the stage
- the weaving and crumpling up of a huge web of Sellotape to produce at first a barrier, then a giant puppet man then an image of Gandhi himself
- the long newspaper streams across the stage that became first another barrier, then wings for Gandhi and then again sky-high banners for projecting words all in one fluid motion.

Posted by overyourhead at Tuesday, October 26, 2021