The Shark is Broken @ Ambassadors Theatre... 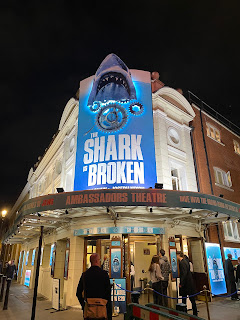 Last Thursday night Stuart and I went to see The Shark is Broken at the Ambassadors Theatre in London’s glitzy West End.

The premise is brilliant.

Cape Cod, 1974: shooting on Steven Spielberg’s ‘Jaws’ has stalled. The film’s lead actors – Robert Shaw, Roy Schneider and Richard Dreyfuss – are stuck on a boat, at the mercy of foul weather and a faulty mechanical co-star ‘Bruce’. Awash with alcohol and ambition, three hammered, heady sharks start to bare their teeth…

We had waited nearly two years to see the show after its rave reviews in Edinburgh. And it was worth the wait. The show was great, the script was very funny, and the three actors (Ian Shaw as Robert Shaw, Demetri Goritsas as Roy Scheider, Liam Murray Scott as Richard Dreyfuss) held the audience’s attention for an hour and a half with no interval. Special mention to Ian Shaw though ; his portrayal of his father Robert Shaw is spot on. The set is superb as well.

That said, it’s not really for the casually interested - but being a huge fan since release in 1975 and sucking up the various legends and tails (tales?) that is ‘Jaws’ I was amongst equally enthusiastic fans. There was a hubbub like a school nativity before the start. Not sure what the few children thought (bit sweary) and it’s hardly The Film That Goes Wrong but the rest of a full house clearly loved it. Fair to say they could do with a bigger theatre. 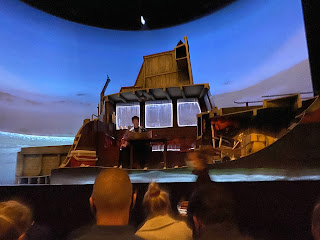 Posted by overyourhead at Monday, October 18, 2021