A story of Indiana Jones, going Dutch and dodging death*.
(*Almost)
Leaving the city behind us today we decided to travel up into the mountains. The mountains in question being the southernmost part of the Himalayas.
And the particular mountain we were heading for was called Doi Inthanon, the tallest mountain in Thailand. Standing at 2,565 metres above sea level, it is dubbed The Rooftop of Thailand. Doi Inthanon National Park is a very popular place for a day trip from Chiang Mai, due to its great and plentiful nature. The weather at the peak of the mountain is cold and clouded with mist all year round and the temperature never exceeds 17º C. The Thais like to go there it is said, to give them an excuse to wear a coat!
Doi Inthanon sits in a National Park with hiking trails surrounding the peak; the Park includes 1,274 plant species; the area is home to 466 animal species, and it is also dotted with a number of waterfalls of various sizes.
Once we got there, the views from Doi Inthanon weren’t particularly rewarding from the summit due to the perpetual mist, formed by the condensation of warm humid air below, hanging around the top of the mountain. It did create a rather eerie effect though.
Almost at the exact summit is a chedi dedicated to the last Lanna King (Inthawichayanon) and beyond is the Ang Ka Trail, a 360m platform walkway through a moss-festooned bog. It was ok. But only ok.
Another better trail nearby was the 2.78km long Kew Mae Pan Nature Trail. Hiring a guide is compulsory due to the delicate thick forest. The guides are all local Hmong Hill Tribe people who are highly expert on the route. They needed to be. It was tough.
The trail was less of a ‘trail’ and more of a level 5 jungle trek to be honest and we felt a bit like Indiana Jones in amongst the lush vegetation and thick dense forest.
At the start of the trail we hooked up with a couple of Dutch lads to split the cost of the Hmong guide. Yes, we went Dutch(!)
We had a fun time swapping stories with the Dutch guys - who turned out to be gay - as we trekked together. They had just left university i.e. were in the early 20s so were asking us all about our travels and our adventures together. So engrossed were we all in our chat that about an hour in, we didn’t realise that our local guide had suddenly run off. We saw him jumping up and down from a distance but we couldn’t understand what he was shouting. The four of us turned round slowly in a rather melodramatic fashion to be confronted by a very green and (as it turned out) very poisonous snake on the bush next to where we were all standing. We decided to take photos of the snake, even some close-ups which made our guide get even more agitated and he jumped up and down even higher and waved his arms in the air. Once we moved away and caught up with him he scolded us, telling us how poisonous the snake was. We laughed at him. Which made him even more cross. We generously over-tipped him at the end by way of apology. I don’t suppose they get their Brucie bonus by bringing back dead tourists.
Bidding goodbye to our new Dutch friends, we headed down the mountain a little bit further to two large pagodas, the Pra Mahathart Napamaythaneedol Chedi and Pra Mahathart Napapoommisiri, built as it turned out by the Royal Thai Air Force to commemorate the king’s and queen’s 60th birthdays in 1989 and 1992, respectively.
The pagodas are made from colourful marble. Also, there is sculpture on the wall which represents Buddhist stories around the pagodas.  Surrounding these pagodas is a beautiful flower garden. Apparently the park is “one of the top destinations in Southeast Asia for naturalists and birdwatchers.” Or so it says on the sign at the entrance.
The mist-shrouded upper slopes did seem to produce abundant orchids, lichens, mosses, and epiphytes although we couldn’t vouch for the claim of nearly 400 bird species.
We also had time to visit the Hmong Village market. The Hmong people were really nice and offered us all sorts of freebies to try their wares and didn’t seem to be remotely pushy about us buying anything. In fact we did buy stuff; all manner of dried fruits and nuts to have as a picnic later on in our trip; probably on one of our upcoming train journeys.
Our final stop before heading back to Chang Mai was for a spot of lunch beside the Wachirathan Waterfall. The lunch was scrumptious. The waterfall epic. A lovely end to our day of sightseeing in the mountains.
Tonight we are going into town again to catch up with Stuart’s 2nd cousin Andrew who lives here. Then tomorrow morning we head back down south again to Bangkok to meet up with the boys who are all flying in from London. 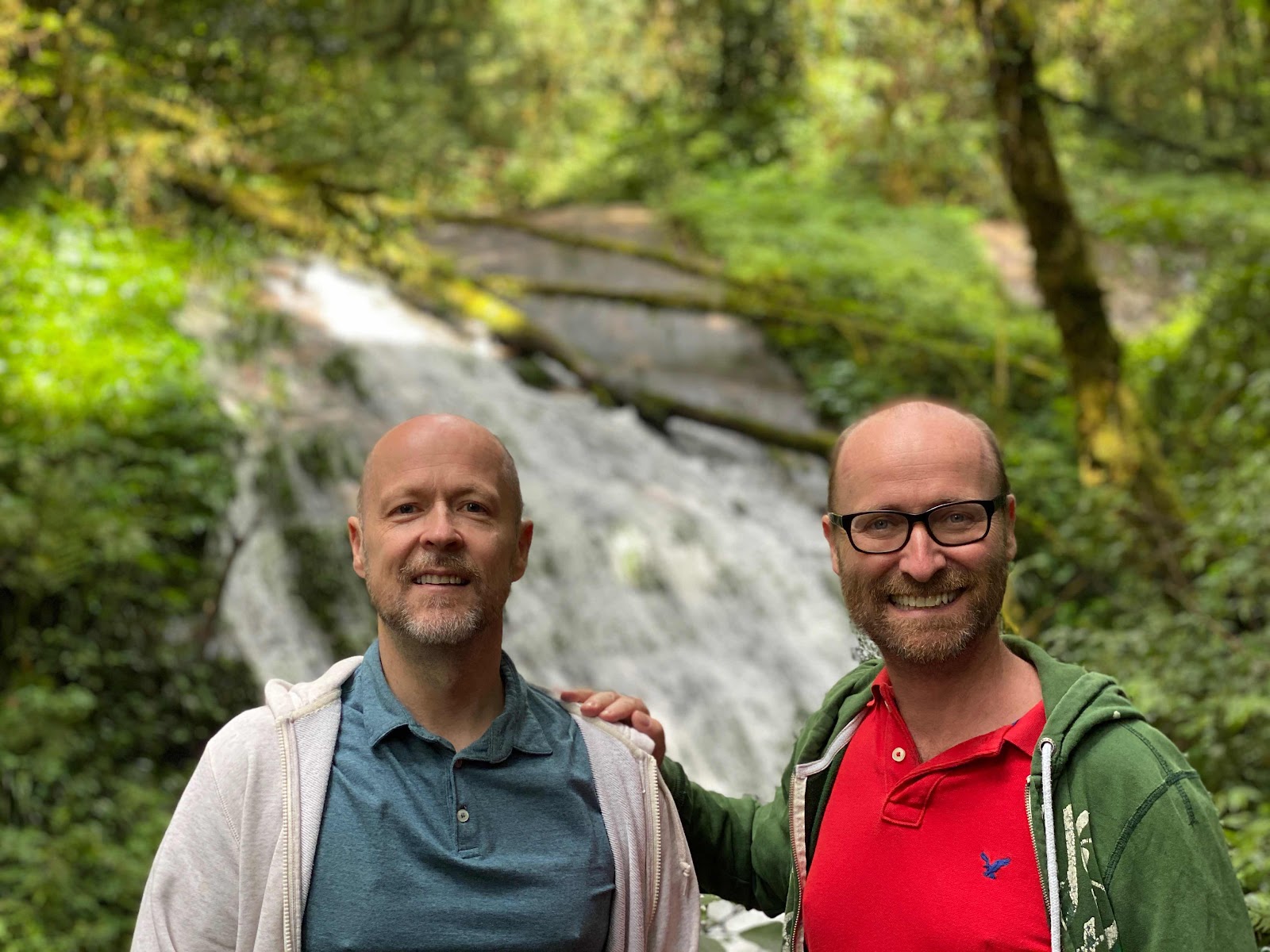 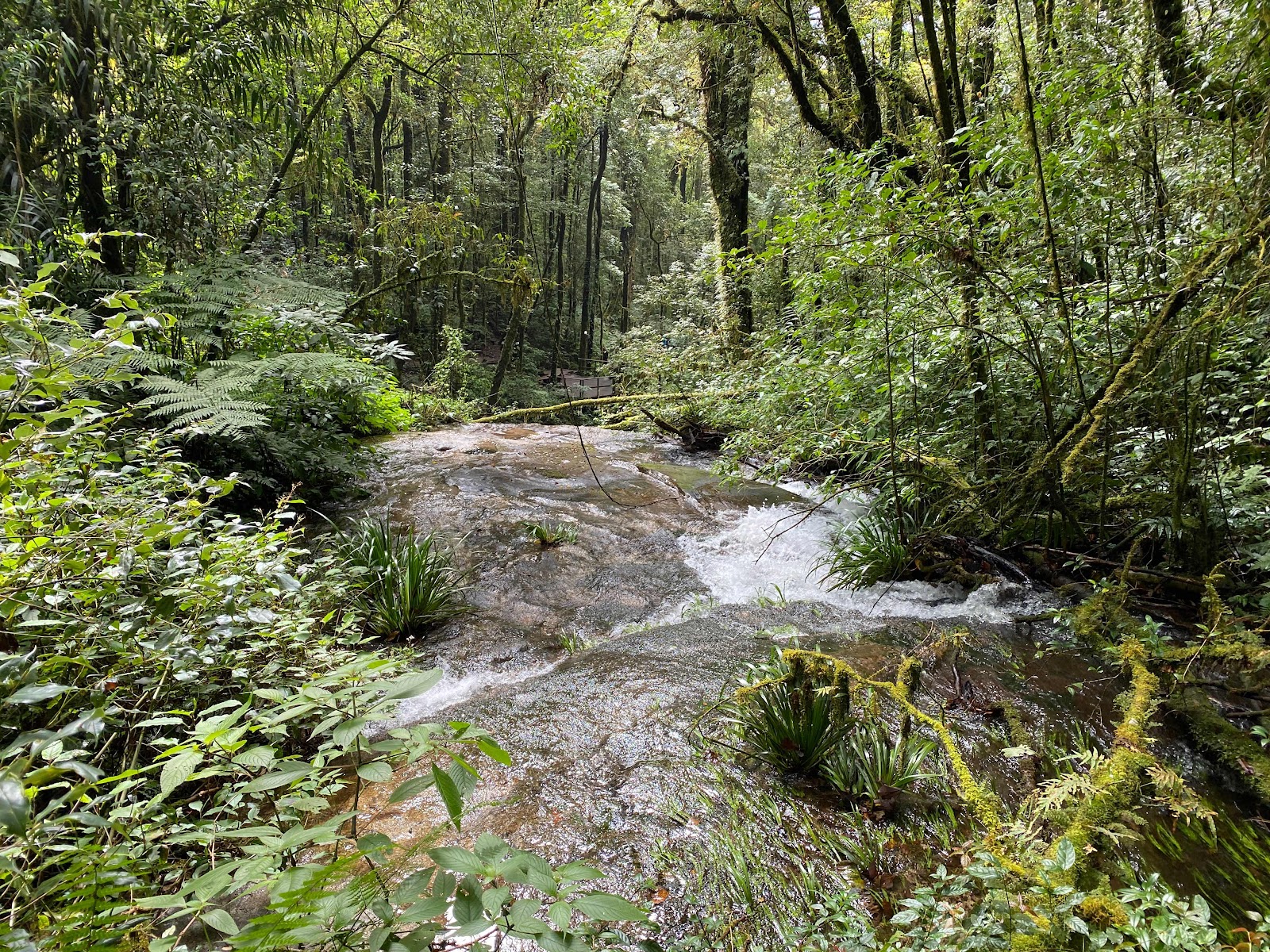 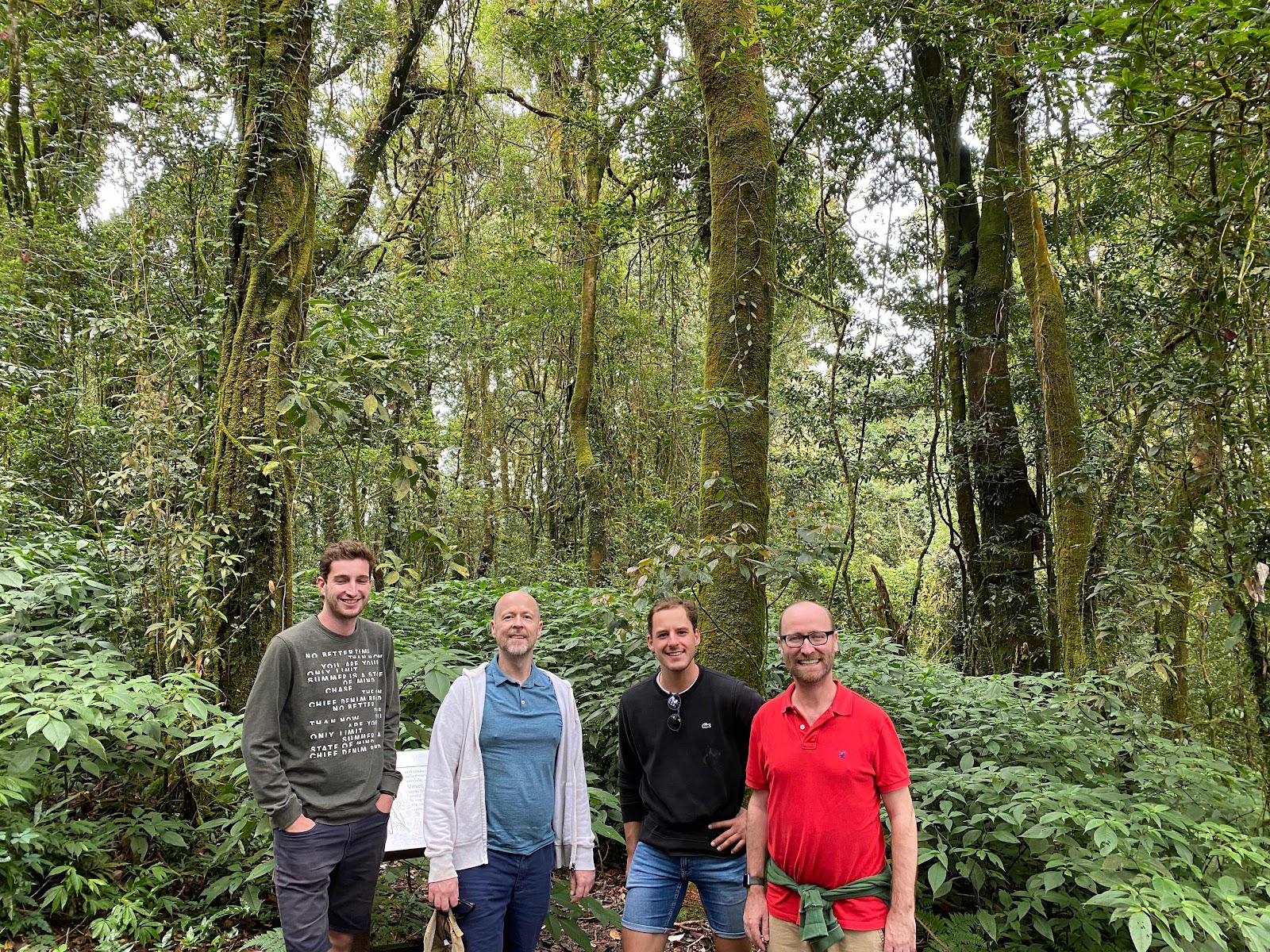 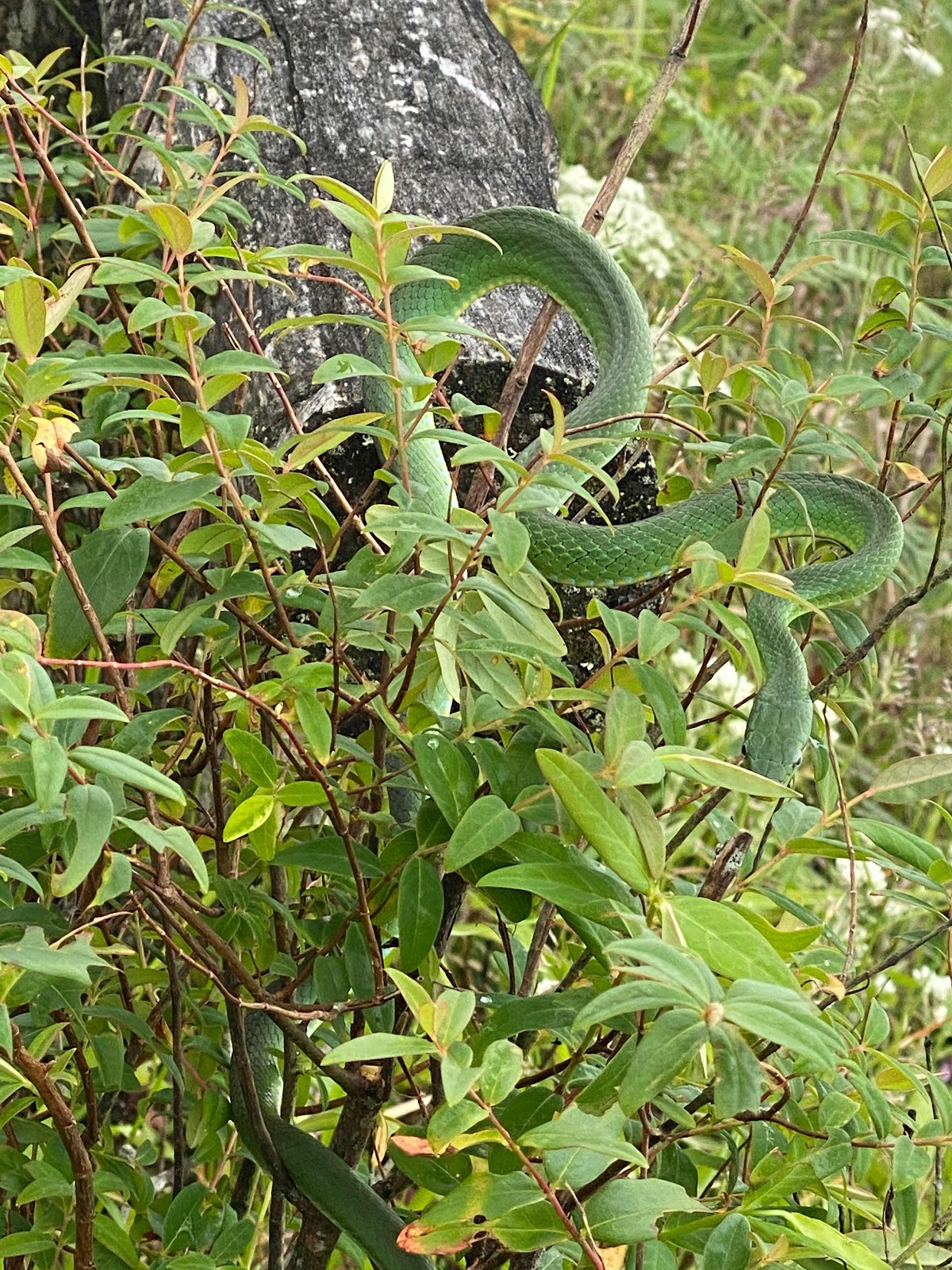 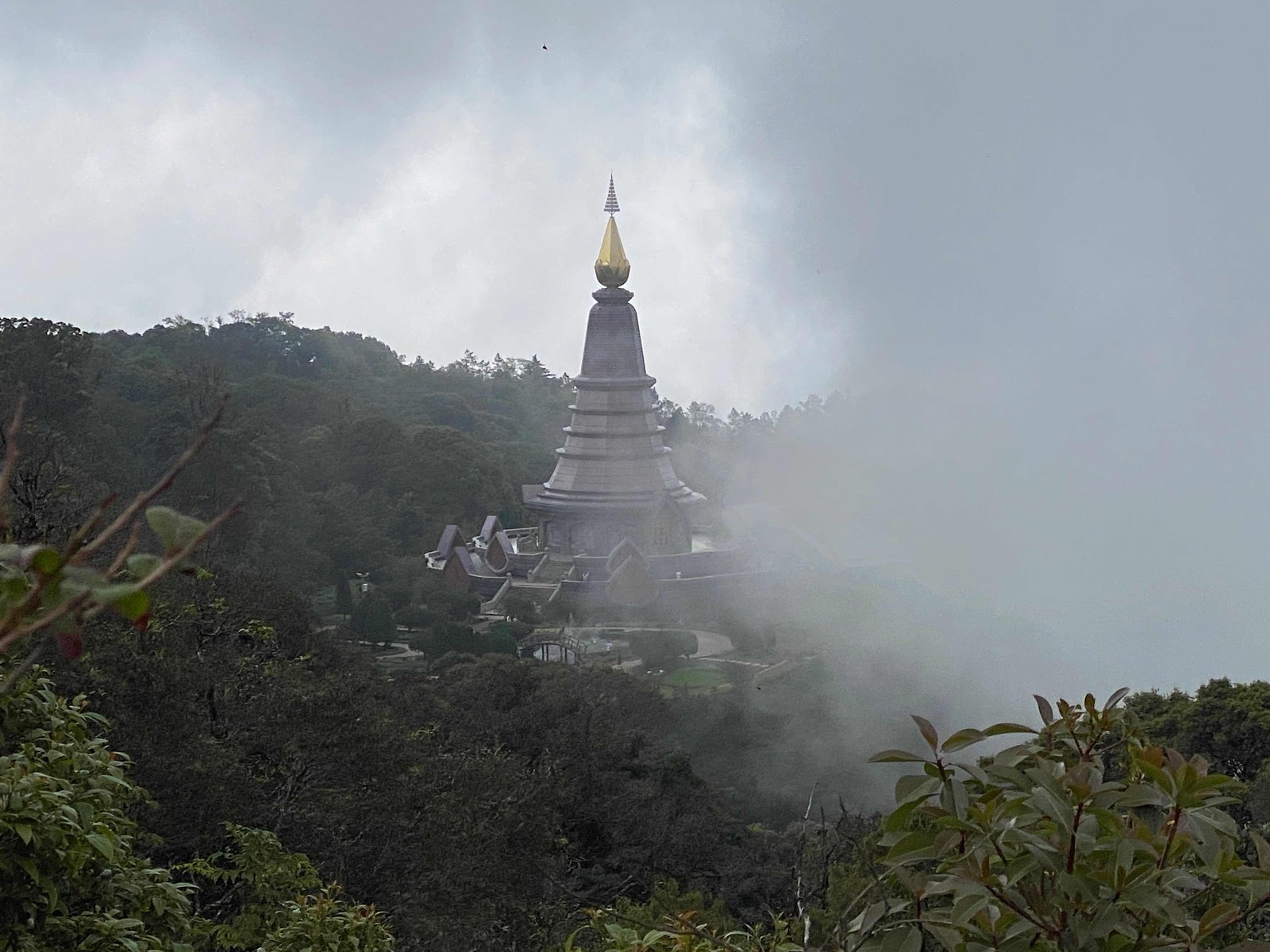 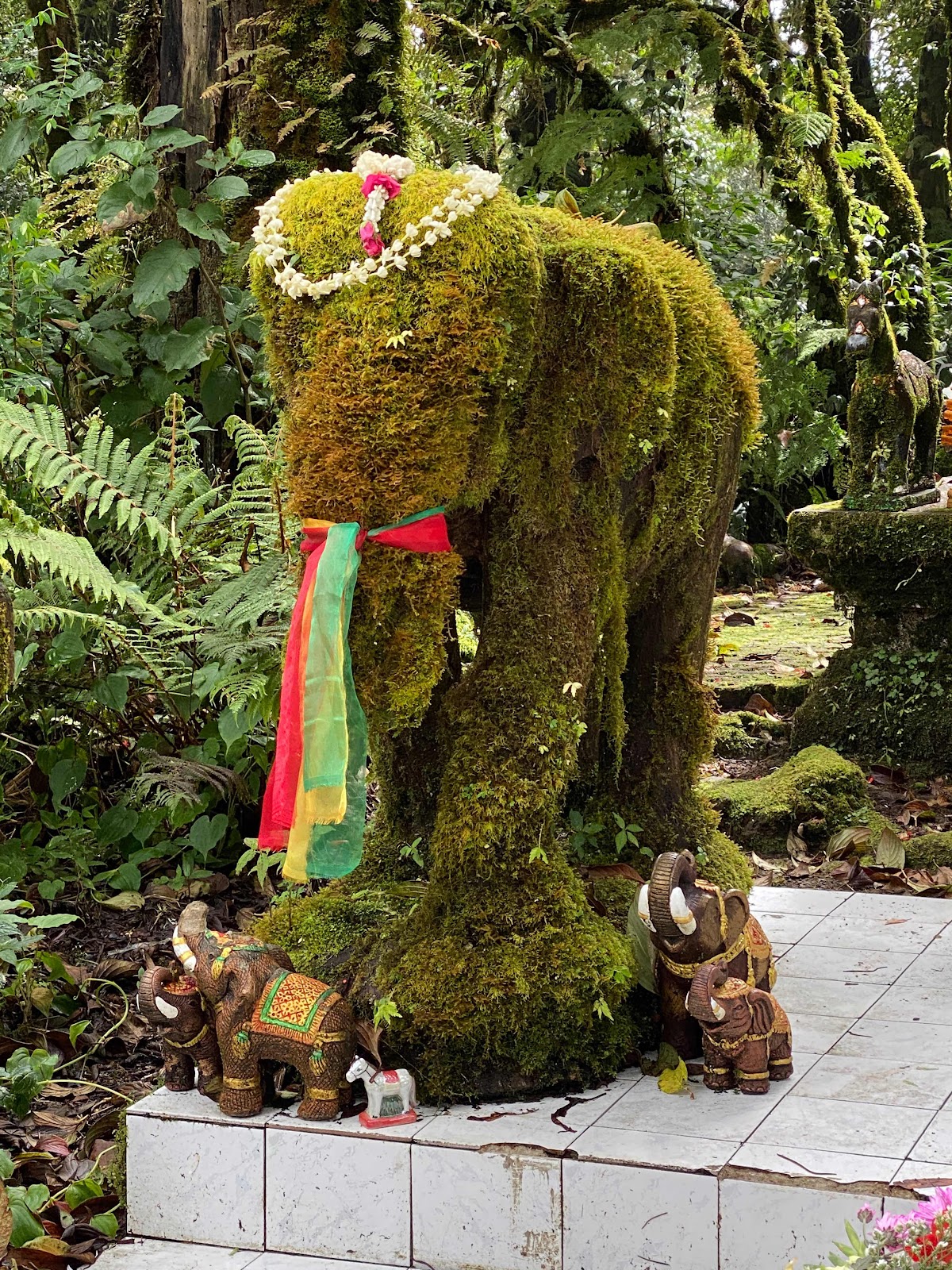 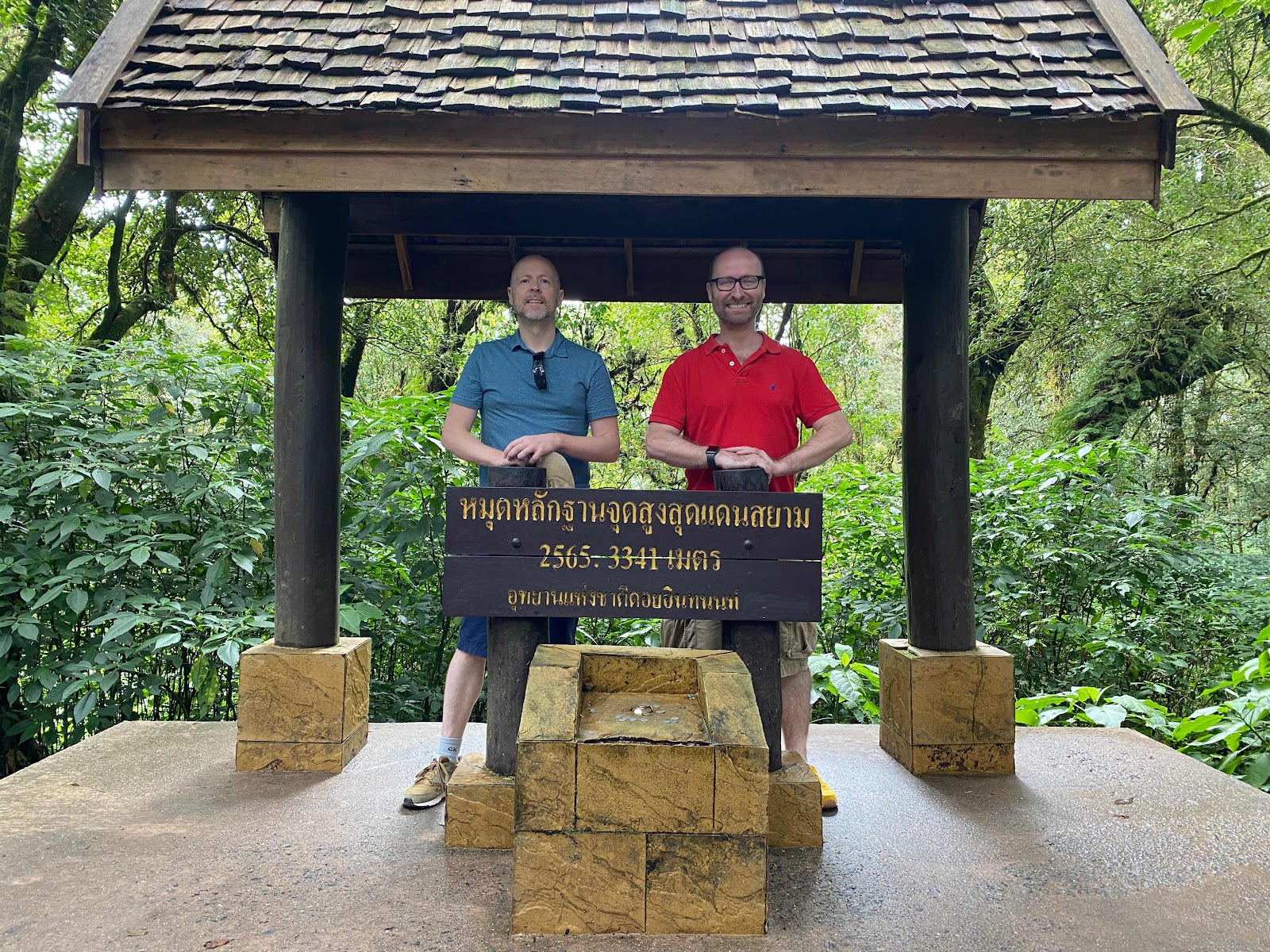 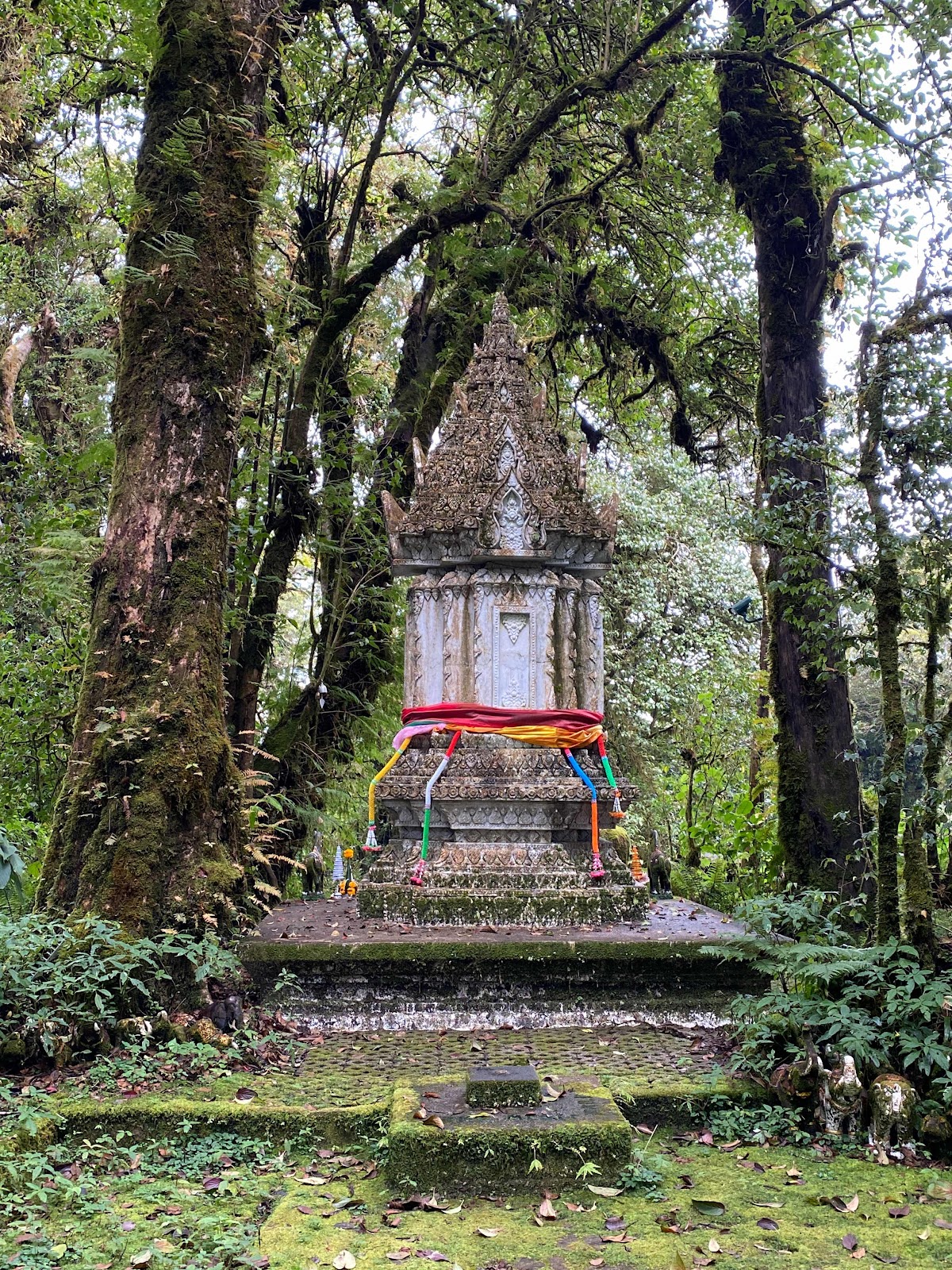 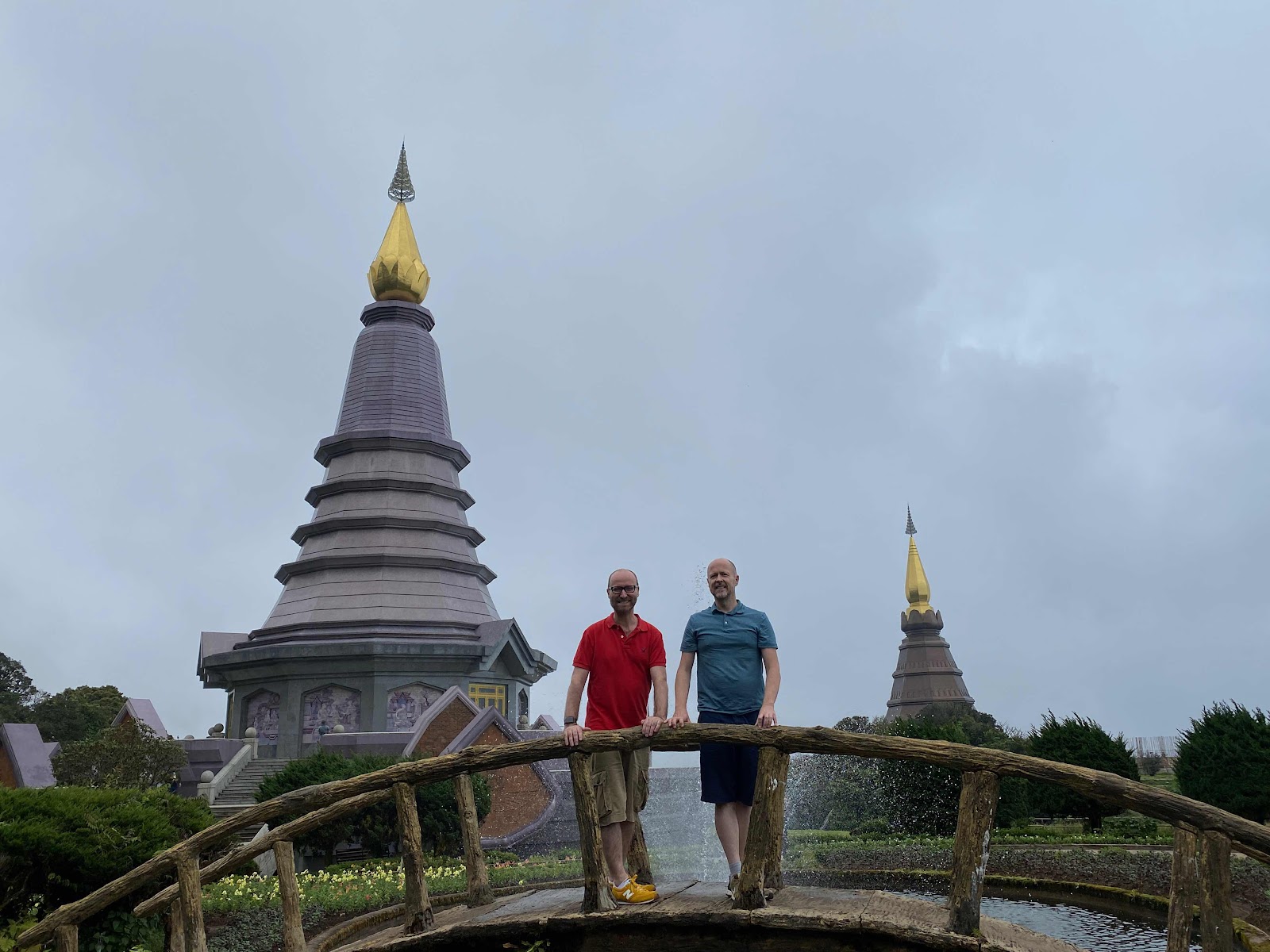 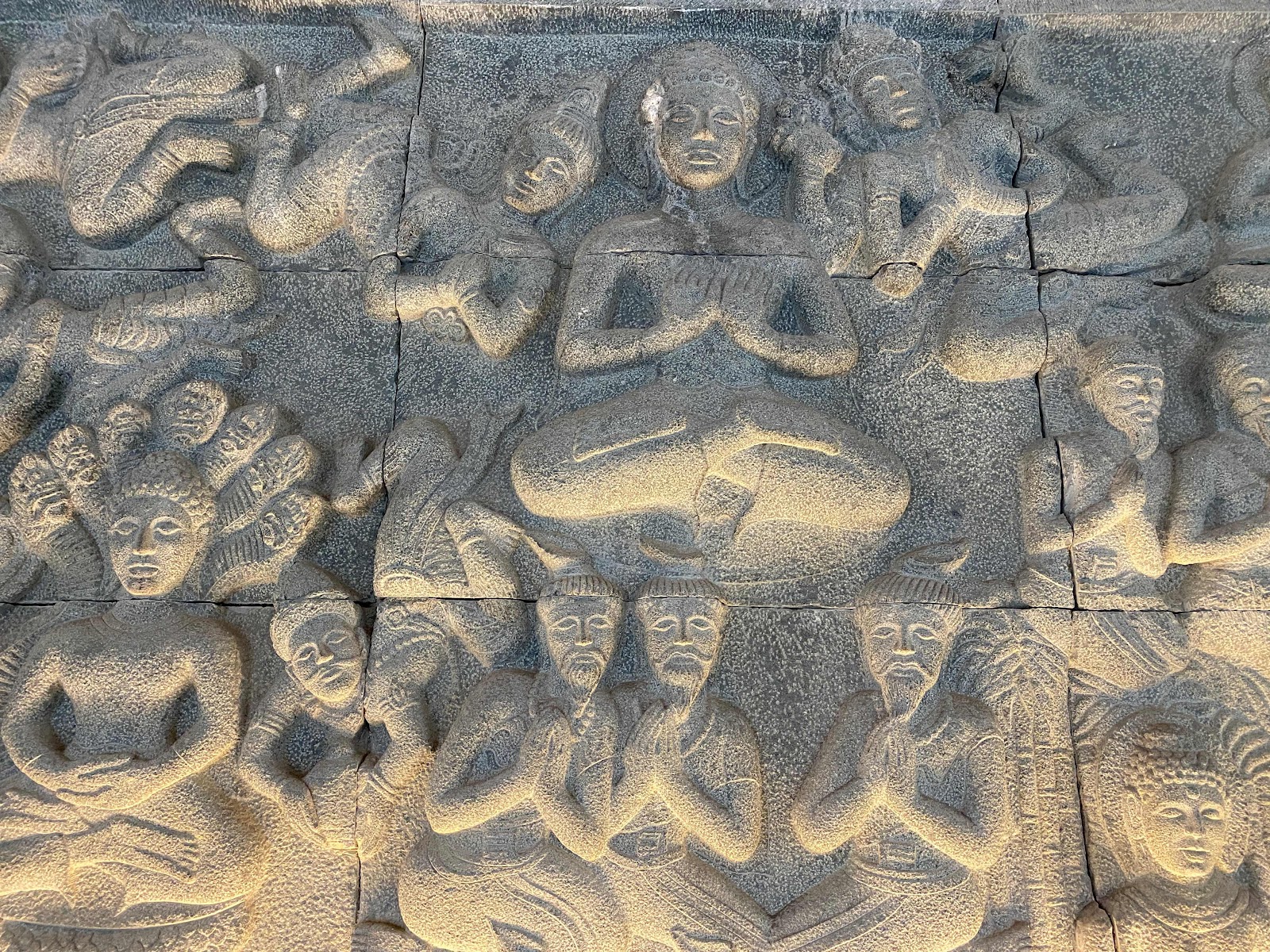 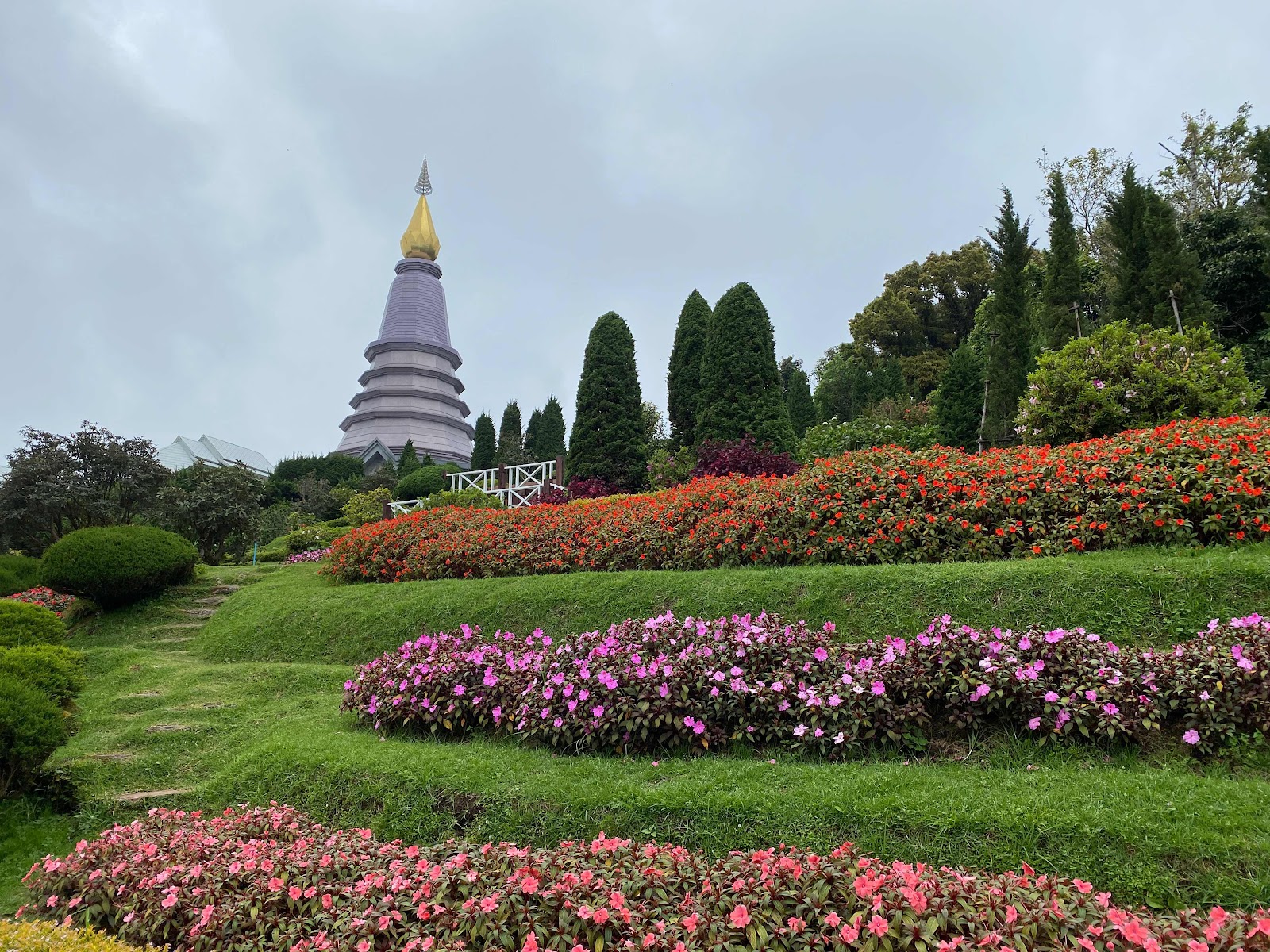 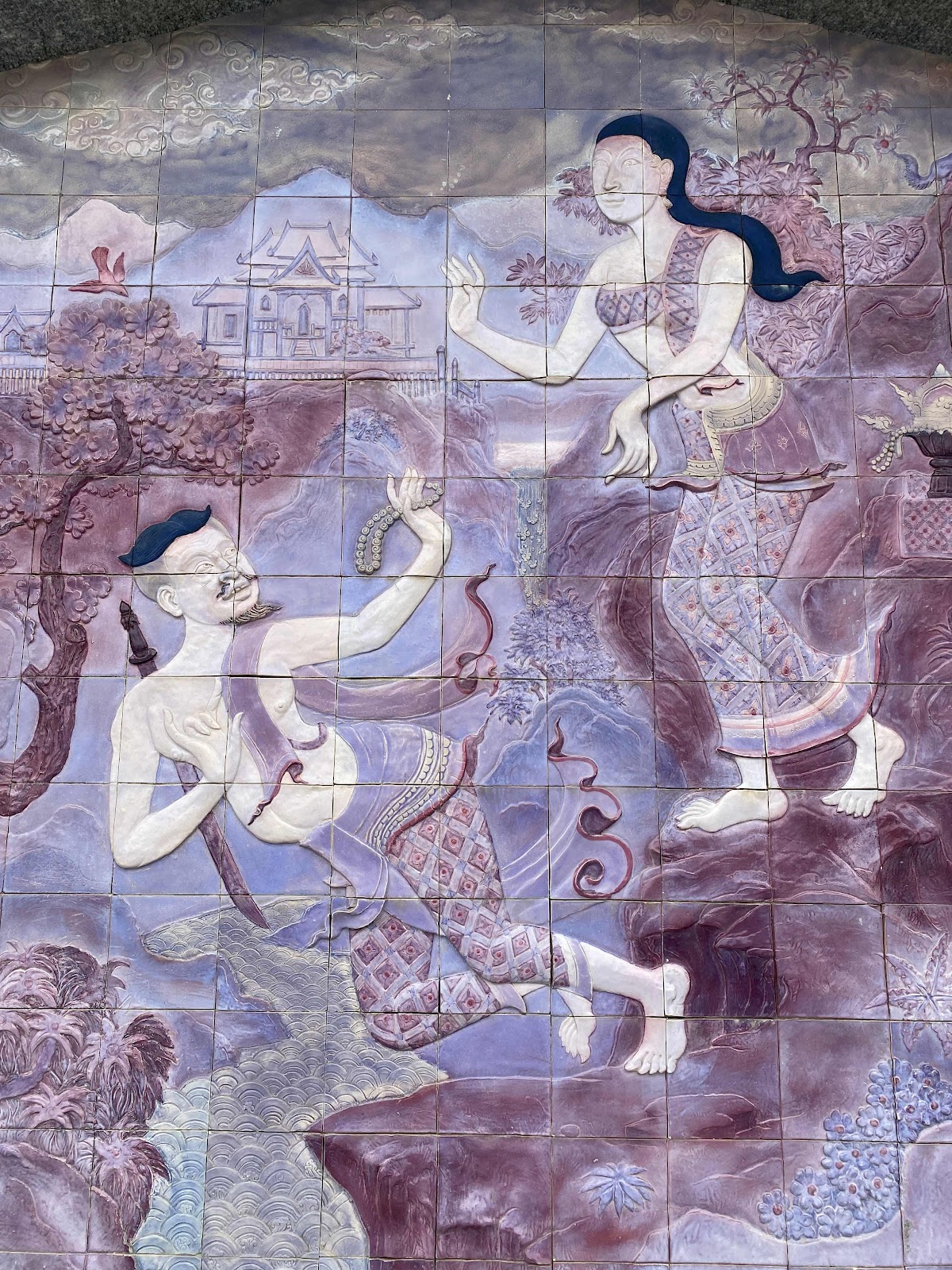 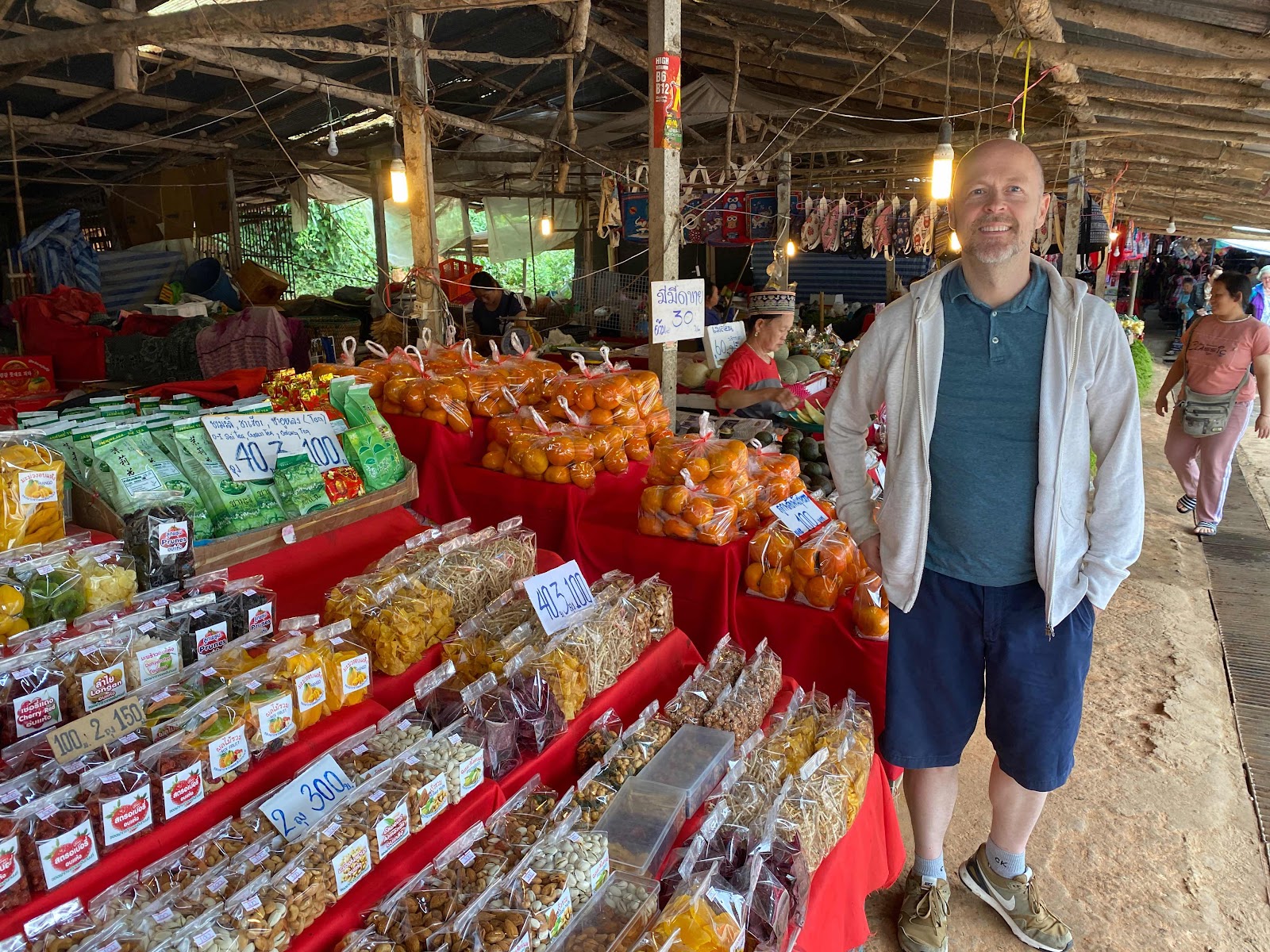 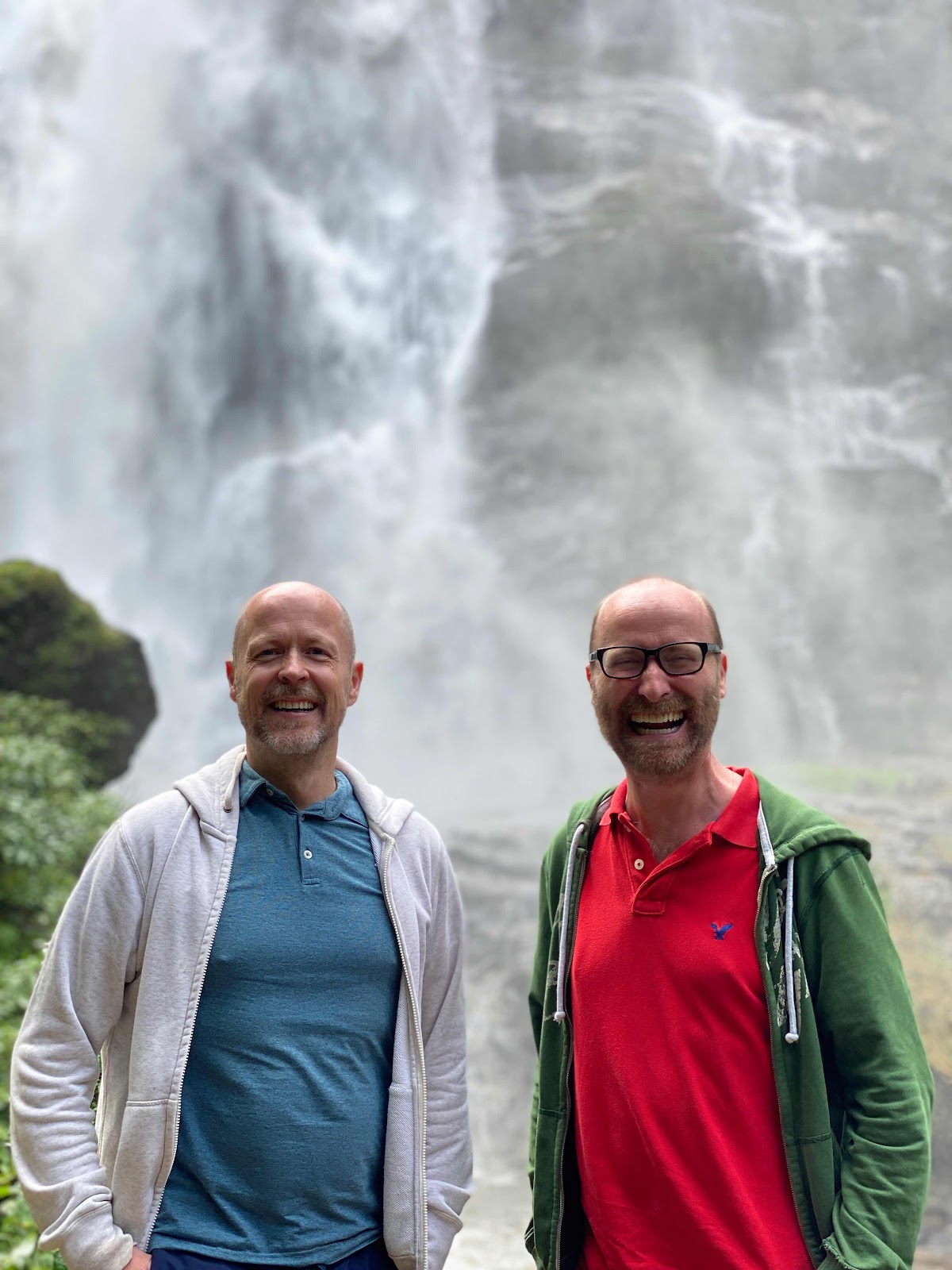 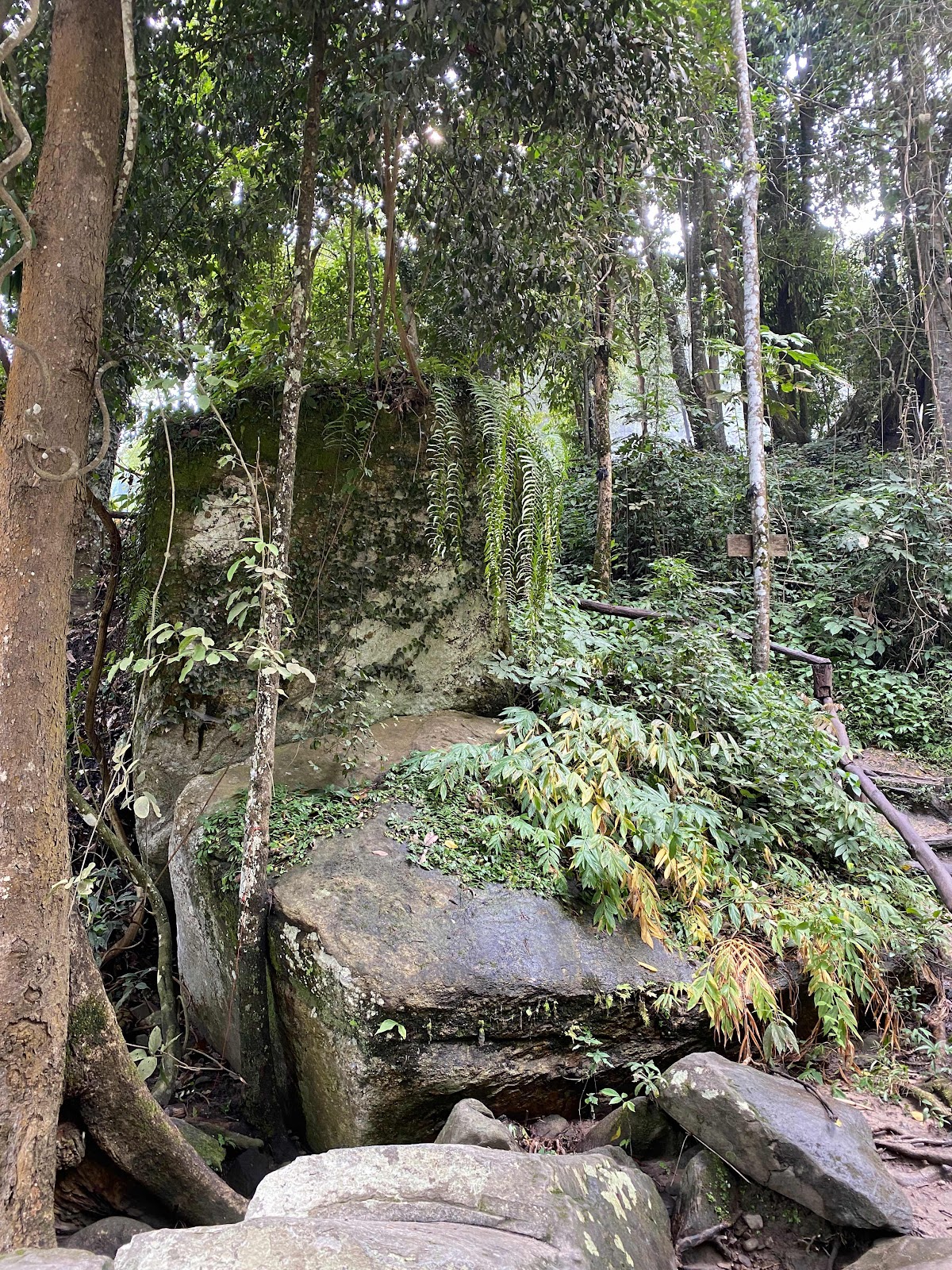 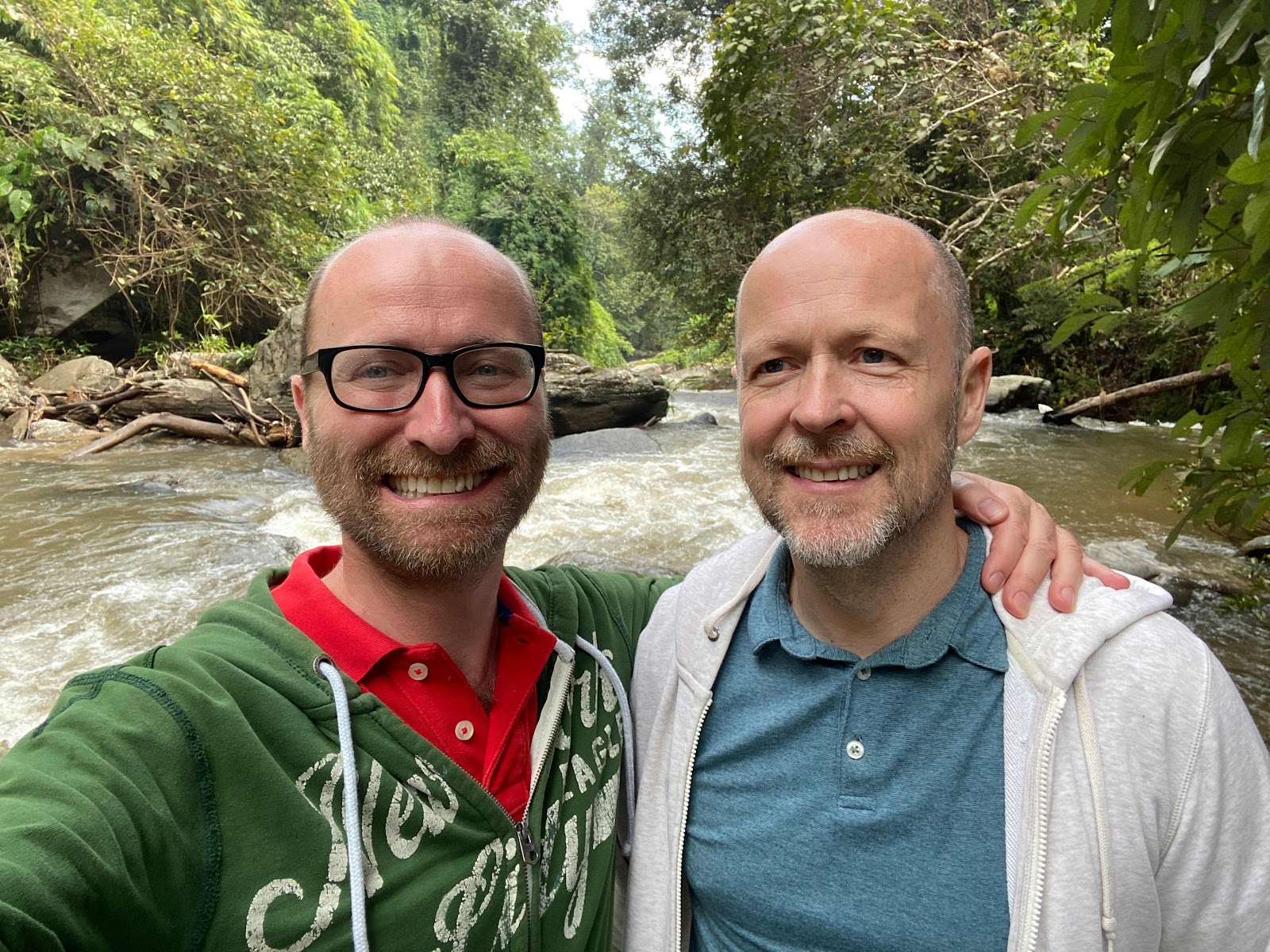 Posted by overyourhead at Tuesday, November 05, 2019