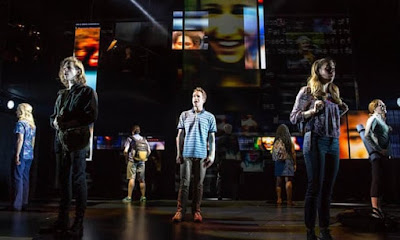 With music and lyrics by Benj Pasek and Justin Paul, and book by Steven Levenson, the show had won armfuls of Tony Awards including Best Musical and Best Score so our hopes were high. Too high maybe.

Was all the hype justified? Has it transferred well to the West End? Is it actually any good?

The plot is about an unpopular American school child Evan with various mental health issues. He suffers from social anxiety disorder with features of Asperger syndrome. He takes meds and is also in therapy. His doctor suggest he write himself complimentary, self-uplifting "Dear Evan Hansen..." letters telling himself how great he is.

Only the school bully finds one of these letters and when the bully goes on to commit suicide (off-stage, I hasten to add) it is assumed that the stolen letter in his pocket when found on his body proves he was a very close friend of Evan. Evan is initially confused, doesn't deny this 'fake' friendship, and even sees it as a way of getting attention. 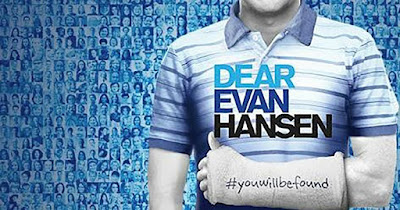 The musical is then about how Evan strings the dead boy's family along; spinning ever more fanciful stories, inventing emails between the two, and ending up fooling his whole school; and even (shock, horror) the Internet. His aim seems to be to get a new family (his biological Dad left years ago and his mum is largely absent) and to get in the knickers of the dead boy's sister. So, he is hardly a sympathetic hero.

The songs are fine. I bought the soundtrack before seeing the show and had listened a couple of times in advance. Standouts are For Forever, Sincerely Me, and Waving Through a Window.

The acting and singing was generally good too, if a little over-wrought at times. Sam Tutty as Evan performs well as does his mother Rebecca McKinnis. Evan's friend and partner in crime Jared played by Jack Loxton is notable too.

Many of the songs are delivered as showstoppers though - shouted, often in unison - so despite knowing the lyrics it was occasionally hard to understand them.

There are a few plot holes too as the boy's deceit goes undetected and it seems a bit rice the most dramatic turning point seems to hinge upon a shouted line, "But, I'm your mother!"

There are unintentionally uncomfortable moments too when Alana, a black character, played by Nicole Raquel Dennis as a politically-correct bully, screams about her own invisibility.

We left the theatre asking ourselves a number of questions and commenting how the show could have been improved. Never a good thing.

So overall, an ok show. Not quite a 5-star show though; 3-star maybe. Other recent American musical imports such as Come From Away, Falsettos and Fun House were all way better.

Posted by overyourhead at Friday, November 29, 2019