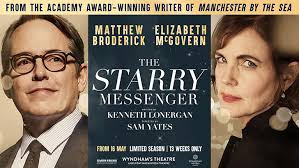 Last Friday night Stuart and I went to see Kenneth Lonergan's The Starry Messenger at the Wyndhams Theatre in London glitzy West End.

This melancholy mid-life crisis drama creeps up on you. Albeit very slowly. Matthew Broderick is the starry attraction though (pun intended).

"Nobody knows anything," says a character who has spent time staring into the abyss in The Starry Messenger. "We’re all just guessing." That may be true, but playwright Kenneth Lonergan sure knows how to enrich the process of fumbling reflection, lacing questions large and small, about ourselves and the cosmos, with characteristic sensitivity, compassion and humour. While it’s frustrating at times and too unhurried, this melancholy, resolutely non-judgmental mid-life crisis drama creeps up on you. It smartly refuses forced epiphanies in favour of quiet contemplation, with an intimacy that reverberates across the night sky blanketing the walls.

The play had a difficult road to the stage via New York some six years ago. A Broadway try-out was cancelled due to Lonergan’s ongoing work on his troubled film, "Margaret." Actors dropped out, reports emerged from previews that the play, running three hours-plus, was rambling and unfocused; that Matthew Broderick, who has remained attached since the beginning, was unsure of his lines and was relying on a prompter; and that Lonergan, in his first time directing for the stage, was still busy cutting and rewriting, his attention sapped by legal headaches over "Margaret."

And despite it's subsequent moderate success on Broadway this belated West End transfer, now directed by Sam Yates, still has some room for fine-tuning as it preview here. Given the quality of the play though and Lonergan’s rewarding writing - any criticism of preview performances probably just  speaks volumes about the ambulance-chasing nature of theatre reporters and chatrooms, eager to form premature verdicts about evolving works.

Broderick plays Mark Williams, a dullish, grey kind of guy who regards himself as second-rate; he has downgraded his life-long ambition to be an astronomer to a dead-end teaching job at the Hayden Planetarium. His marriage to Anne (Elizabeth McGovern) is not exactly unhappy, but it’s flat, underscored by the tension of her verbosity clashing against his uncommunicativeness.

Mark strikes up a friendship that develops into romance with young single mother and trainee nurse Angela (Rosalind Eleazar). In a secondary storyline, Angela offers a sympathetic ear to the struggle with mortality of seemingly terminal cancer patient Norman (Jim Norton). This creates friction with his tightly wound daughter (Sinead Matthews), who feels no closeness with the old man. But a tragedy in Angela’s life abruptly shifts her perspective, also derailing her relationship with Mark.

Lonergan segments the drama over four playing spaces in McLane’s cobalt blue Planetarium set, representing the classroom, hospital, Mark’s home and Angela’s. While the connective thread, particularly with the hospital scenes, could be stronger, the play and its insinuating questions about life and relationships acquire cumulative weight and poignancy.

Broderick requires some getting used to. At first glimpse, his performance seems a repeat of the standard monotone nebbish he’s sleepwalked through in his last handful of stage appearances and film roles. But Lonergan wrote this part for the actor, and like all the characters here, Mark has far deeper shadings than are apparent in the way he’s initially presented.

Broderick explores those shadings with subtlety and humility in a performance full of piercing understatement. The thoughts that play across his face as he listens alone to an aria from "La Traviata" tell a heart-breaking story. His scenes with McGovern are especially elevated by emotional truth, as Anne, rattling off concerns about an impending holiday family visit, lurches nervously between brittle and soft, controlling and accommodating.

McGovern is very touching as a woman torn between exasperation and anxiety about her marriage. Delicate insights also emerge through small, telling exchanges between Mark and their unseen teenage son (voiced offstage).

Eleazar rises to the challenges of playing the inconsistently changeable Angela beautifully. She grows in the role, showing lovely nuance in some scenes with Norman, who is played with a humorous and very real balance of empathy, self-pity and no-bullshit curmudgeonliness by Norton.

Mark’s long monologue to his students near the end is a little over long and overwritten. That said, he reflects on the vast mysteries of universes scientific, personal and spiritual, and the endless different ways those worlds can be viewed. And yes, Lonergan stuffs too much into the speech, but as a means of connecting the central character to his history and his uncertain future, conveying how this closed-off man has begun to look within himself, it has glimmers of real soul. Which is a quality that distinguishes The Starry Messenger as a whole.
Posted by overyourhead at Monday, May 20, 2019