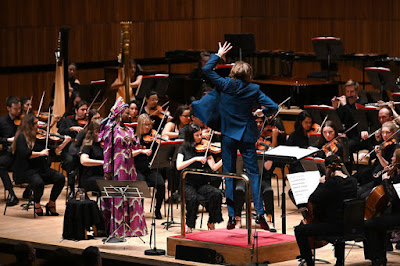 Last night Stuart, Dilwyn, and I went to listen (watch?) The Bowie Symphonies by Philip Glass be performed at the Royal Festival Hall on London's glitzy South Bank.

The three symphonies are based upon David Bowie's Berlin Trilogy of albums. Retreating from the glitz and debauchery of the rock world in the 1970s, Bowie moved to West Berlin and collaborated with singer/keyboardist/experimentalist Brian Eno on the albums Low, Heroes, and Lodger. The first two incorporated moody, introspective, mesmerizing electronic pieces influenced by the German synth band Kraftwerk. Open-minded classical folk were drawn in. Glass, whose brooding, evolving language wasn’t far removed from what Bowie and Eno were doing, was especially intrigued.

With his usual diligence and work ethic, Glass produced first a Low Symphony (Symphony No. 1) in 1992 and then a Heroes Symphony (Symphony No. 4) in 1996, taking themes from the Bowie albums – Low more so than Heroes – and developing them into Glass rhapsodies. The Heroes Symphony is the more successful of the two (Bowie reportedly thought so himself), sporting a lighter balletic texture and fewer Glass clichés, while the Low Symphony works best, ironically, when it hews close to the Bowie/Eno recordings.

Lodger stubbornly resisted transformation for years, and that’s not a surprise. It was the only out-and-out rock album of the three, lacking instrumental tracks, with Eno present in just six of the 10 selections. Glass couldn’t get a grip on it, for he claimed it lacked melodic themes that could serve as launching pads (it does have themes, but they don’t grab the ear as readily as those of Low and Heroes). So he ultimately decided merely to set the lyrics to his own music.

The result, a radically different piece than either of the Bowie symphonies preceding it, was a symphony in the form of a song cycle, and, sadly, less successful. The new music does little to help the lyrics. The lyrics are elliptical touching on such subjects as travel to places like Africa, Cyprus, or Kyoto; masculinity; and violence against women.

Clad in a colourful traditional West African outfit, Angélique Kidjo, the acclaimed singer from Benin, provided the vocal for the Lodger symphony. But she was caught in a straitjacket of a huge symphony orchestra playing in strictly fixed pitches. Her amplified voice sounded declamatory and rigid in this context as she strained for the lower notes. You could tell five seconds after Kidjo’s first entry that something was amiss. The dignity of her bearing was intact, but I could detect only fleeting identification with the texts, most noticeably in "Boys Keep Swinging" with its sarcasm about male privilege. It was disappointing that the Lodger Symphony turned out to be a mismatch of style and delivery.

Philip Glass: Symphony No.1 (Low)
I. Subterraneans
II. Some Are
III. Warszawa