Small Island "the fact that the play is opening at the time this country becomes a slightly smaller island than it was before is sadly, timely" #SmallIsland @NationalTheatre 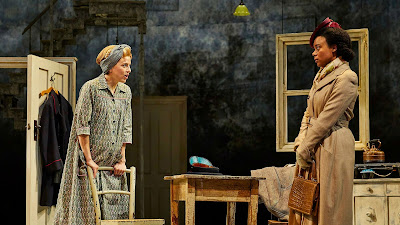 Last Friday night Stuart and I went to see Small Island at the Olivier Theatre in London's glitzy South Bank.

Small Island is based upon the the epic 2004 multi-prize winning novel of the same name by British author Andrea Levy. It tells the tangled history of Jamaica and UK through the eyes of characters who in 1948 arrive at Tilbury, London, on the boat Empire Windrush.

Levy herself said in 2004: "When I started Small Island I didn't intend to write about the war. I wanted to start in 1948 with two women, one white, one black, in a house in Earls Court, but when I asked myself, 'Who are these people and how did they get here?' I realised that 1948 was so very close to the war that nothing made sense without it. If every writer in Britain were to write about the war years there would still be stories to be told, and none of us would have come close to what really happened. It was such an amazing schism in the middle of a century. And Caribbean people got left out of the telling of that story, so I am attempting to put them back into it. But I am not telling it from only a Jamaican point of view. I want to tell stories from the black and white experience. It is a shared history."

And this sums up the play perfectly. It is a story of a shared history, of the war, of racism, of the Windrush Generation, and of love. And, to put it simply, we loved it too.

The plot is complex, peppered with backstory, but suffice to say it is about suffering. Suffering and making do. And wanting a better life.

And although the book is great, the play really brings the whole story to vivid life. Helen Edmundson's stage adaptation is super, and Rufus Norris's production is not only spot on, but of course doubly prescient because of the current Windrush scandal and Brexit.

And the fact that the play is opening at the time this country becomes a slightly smaller island than it was before is sadly, timely.
Posted by overyourhead at Thursday, May 02, 2019