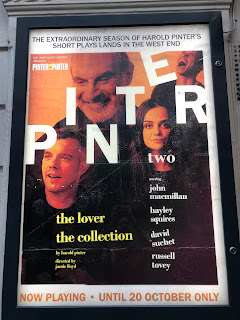 Last night Stuart and I went to see an amazing production of two Harold Pinter plays, The Lover and The Collection, at the Pinter Theatre in London's glitzy West End.

Billed as part of the Pinter at the Pinter season, this night was called "Pinter Two" being the second collection (albeit, confusingly, the one we were seeing first.) Superbly directed by Jamie Lloyd it was a top night as we were treated to two miniature comedic masterpieces from the 1960s that explored secrets, lies and seduction.

The first play The Lover starred John Macmillan and Hayley Squires as a husband and wife both having affairs. But with whom? They do seem like a conventional, suburban couple but in such unconventional circumstances. The play is playful, funny and provocative.

The second play The Collection has been hailed as one of the outstanding plays of the 20th Century by Laurence Olivier. It delves into the intriguing mystery of two London couples linked by sexual desire and a quest for supremacy.

Husband and wife James (John Macmillan) and Stella (Hayley Squires) live near gay couple Harry (David Suchet) and Bill (Russell Tovey). Stella and Bill are both dressmakers and last week were at a conference away in Leeds. Did they meet? Did they have sex? James wants to know what went on. And so a battle of wordplay, and sexual power games ensues. It was very funny and brilliantly unnerving.

And can I just say I take it all back. Russell Tovey was fucking brilliant. A revelation. And by that I mean he revealed a lot. He acted his socks off. His socks... His t-shirt... His trousers...
Posted by overyourhead at Friday, September 14, 2018