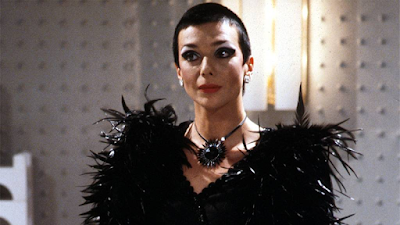 I was saddened to learn that Jacqueline Pearce, star of Blake’s 7, Doctor Who and Hammer Horror movies, died yesterday aged 74.

I was lucky enough to have met Jacks a few times in the early 1980s when I was part of the then budding Blake's 7 Appreciation Society. She was as striking a woman as she was an actress.

She is of course best remembered for playing Supreme Commander Servalan, the wry, calculating sociopathic villain, who was both glamorous and ruthless in said popular BBC science fiction series Blake’s 7. A show which retains a keen cult following to this day. Initially appearing in a supporting role for a single episode, the character proved to be so popular that she was invited back for more. Servalan became a recurring villain, appearing regularly throughout the series’ four seasons, from 1978 to 1981 (with Pearce ultimately billed as second lead after Paul Darrow's anti-hero Avon). She would later recall, with delight, how she received numerous fan letters from young men whose passions had been awakened by her sexually charged performance as Servalan.
Posted by overyourhead at Tuesday, September 04, 2018