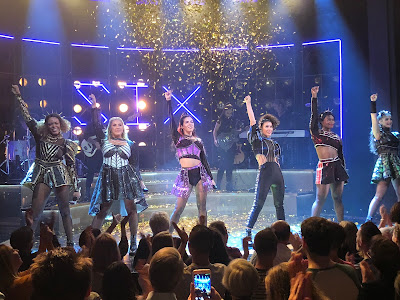 Last Friday night Stuart and I sent to see Six at the Arts Theatre in London's glitzy West End.

We all think we know the story of Henry VIII's six wives; "Divorced, beheaded, died. Divorced, beheaded, survived." but this new musical remixes their stories from Tudor queens to pop princesses. We were treated to a right royal night out, in that long British tradition of making history fun.

It may be cloaked in silliness, but Six makes some serious points about female victimhood and survival. These six strong women are wickedly portrayed rather than wickedly betrayed. If GCSE history classes were half as energised as the musical Six there would have been a 100% pass rate.
Posted by overyourhead at Monday, September 17, 2018